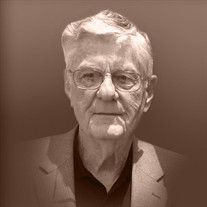 James “Royce” Carney, of Raytown, Missouri, passed away on December 9, 2021. He lived a full and productive life of nearly 93 years and this past Thursday was peacefully brought home to his eternal resting place. Royce was born on January 7, 1929, in Monett, Missouri. The son of Oral and Maude (Stubblefield) Carney, he graduated from Pittsburg High School in 1947 and spent one year at Pittsburg State University. Shortly after, Royce joined the U.S. Army and served as a forward scout in the U.S. Army Infantry during the Korean War. Upon returning from Korea, Carney relocated to Kansas City and began a 32-year career with the U.S. Postal Service. He followed that with 19 years of delivery service for a local dental lab. Royce married Pittsburg, Kansas, native Shirley Bolinger in 1955. The couple settled in Kansas City/Raytown and raised their family. Royce and Shirley celebrated a milestone 65th-wedding anniversary before Shirley’s passing in 2020. Royce was a loyal, family man and for years investigated his family history, tracing and documenting the Carneys back to their arrival in America in the mid-1700s and to the original members of the Daughters of the America Revolution in the late 1800s. He also eagerly accepted responsibility for preserving time-honored family recipes like the Sunday morning deep-fried “flitters” and the seasonal harvest and preparation of the coveted pear honey jam. True to his farm-raised heritage, he was a “tinkerer” and the ultimate DIY guy. There was little to nothing he could not build or repair. The hallmark of his life, however, was his dedication to the service of others. From family lawn mowing days with grandson Ian to assuming full responsibility for the care of a dependent neighbor, Royce always placed a priority on shepherding those in his flock. Royce was preceded in death by his wife Shirley, their infant son James Daniel Carney, his parents, two sisters and great-grandson, Trent Asmussen. He is survived by his four children: Emily “Beth” Munter of Grain Valley, Missouri; Janet Harrison (Taylor) of Lee’s Summit, Missouri; Jeffrey Carney (Laurie) of Kansas City, Missouri; and Steven Carney (Tara) of Mesa, Arizona. Royce was a beloved grandpa to seven adult grandchildren and ten great-grandchildren, two of whom are his namesakes. A family memorial service is planned for Thursday, December 16, 2021 at 2:00 p.m. at Bath-Naylor Funeral Home in Pittsburg, Kansas. In lieu of flowers, the family kindly suggests a memorial gift in Royce’s honor to Ronald McDonald House Charities of Kansas City. Please visit https://rmhckc.org/donate/

James &#8220;Royce&#8221; Carney, of Raytown, Missouri, passed away on December 9, 2021. He lived a full and productive life of nearly 93 years and this past Thursday was peacefully brought home to his eternal resting place. Royce was born... View Obituary & Service Information

The family of James Royce Carney created this Life Tributes page to make it easy to share your memories.

James “Royce” Carney, of Raytown, Missouri, passed away on December...

Send flowers to the Carney family.