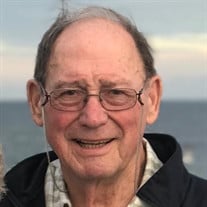 James D. “Jim” Buche, 84, of Pittsburg, Ks, died on Tuesday, May 14, 2019. Jim was born October 10, 1934 in Pittsburg, Kansas to Joseph G. and Lorene (Schreeb) Buche. He attended St. Mary’s Catholic Schools, graduating in 1952. As a member of the Presbyterian Boy Scout Troop 50, Jim earned his Eagle Scout and Order of the Arrow in 1948. He served his country as a member of the Kansas National Guard, serving six months active duty and five and a half years reserve active duty. On June 25, 1957 he was united in marriage to Carolyn M. Buckley at Our Lady of Lourdes Church in Pittsburg, Kansas. Jim and Carolyn had six children. They were married for 60 years. Jim graduated from Rockhurst College in Kansas City, Missouri with a BSBA, majoring in accounting/economics and philosophy. He was employed for seven years with Frito Construction in Pittsburg, Kansas; twenty-five years with Dickey Clay Mfg. Co. in Pittsburg, Kansas, Kansas City, Mo, and Birmingham, Alabama; ten years with Price Brothers Construction/Pre-stressed Pipe Co. in Kansas City, Kansas. In each location, Jim was very active in the Catholic Church community and belonged to various organizations in regards to his employment. After retiring in 1998, he and his wife returned to Pittsburg where he served on several civic organizations including United Way. But it was Pittsburg Beautiful that became his real passion where he spent countless hours and commitment volunteering in many capacities. Jim was an active member of Our Lady of Lourdes Church serving as a Eucharistic minister and a lector. He was also a member of the Knights of Columbus. Twice, Jim made a “hole-in-one” while enjoying a great day on the golf course, especially as a member of Crestwood Country Club. Some of the greatest joys Jim had were spending time with his wife and family at Roaring River and at the beach. Seeing him with a rake in his hand, keeping his yard immaculate was part of his work ethic that he passed on to his children and gave him great pleasure. Jim is survived by children: Steve (Michele) of Kansas City, KS, Nancy (Jim) Evans of Pittsburg, Cathy (Dean) Brazier of Birmingham, AL, Paul (Tammy) of Pittsburg, Mary (David) Ukena of Springfield, MO, grandchildren: David Evans of Webb City, MO, Father Joshua Evans of Wichita, KS, Katie (Colby) Childs of Littleton, CO, Alex (Taylor) Evans of Columbus, Taylor Brazier (Fiancé Jay Howell) of Birmingham, AL, Jeremiah Buche of Pittsburg, and Caroline (Brandon) Bowenschulte, Courtney Ukena (Fiancé Andrew Peebles), and Neal Ukena all of Springfield, MO, great grandchildren: Amyx and Blake Evans of Columbus and Addison Childs of Littleton, CO, sister-in-law: Ann (Buche) Conroy, of Waukegan, IL, and numerous nieces and nephews. His wife, parents, infant son David Joseph, sister Patricia Ann, brother William Joseph and sister-in-law Joan Wilbert and brother-in-law Mel Wilbert, preceded him in death. Mass of Christian Burial will be 10:00am Tuesday, May 21, 2019 at Our Lady of Lourdes Catholic Church with Fr. Josh Evans as celebrant. Burial will follow at the Highland Park Cemetery in Pittsburg, KS. Rosary will be recited at 7:00pm Monday, May 20, 2019 at Our Lady of Lourdes Catholic Church with family to receive friends following the rosary. In lieu of flowers, the family asks expressions of sympathy to be in the form of memorials to the Our Lady of Lourdes Memorial Fund and/or Pittsburg Beautiful. Friends may drop off or mail memorials to Bath-Naylor Funeral Home 522 S. Broadway Pittsburg, KS 66762. Condolences may be left at www.bathnaylor.com. Arrangements and services are under the direction of Bath-Naylor Funeral Home of Pittsburg, KS.

The family of James D. Buche created this Life Tributes page to make it easy to share your memories.

Send flowers to the Buche family.