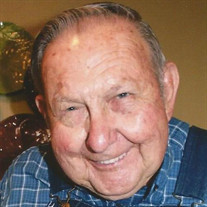 COLUMBUS, KS – Jack D. Soper, 83, of Columbus, died October 11, 2016 at Mercy Hospital in Joplin, MO. He was born March 23, 1933 in rural Columbus, KS the son of Glenn Ash and Thelma McFarland Soper. He had been a lifelong resident of Columbus, KS graduating from Columbus High School with the class of 1951. He served in the United States Army from 1953 to 1955, serving for 18 months in Germany. Jack worked for 30 years at the BF Goodrich Plant in Miami, Oklahoma and also worked for 30 years at Specialty Projects in Columbus, KS, retiring in 2016. He was a member of the First Christian Church in Columbus, KS where he served as a deacon, life member of the Columbus VFW, 61 year member of Columbus American Legion, he coached little league for 7 years in Columbus and always attended his children’s and grandchildren’s events throughout the years. Survivors include two sons David Soper and his wife Janet, DeWayne Soper and his wife Kari both of Columbus and one daughter Dee Dee Soper and her significant other Jim Bowen of Columbus, one sister Geneva Grubbs of Columbus, eight grandchildren Madeline Carpino and her husband Robbie, Miranda Soper, Monica Soper, Kyle Soper and her future husband Wade Robinson, Reagan Soper, Landin Soper, Maeleigh Soper and Dawson Soper, two great-grandchildren Cali Carpino and Cami Carpino. He was preceded in death by his son Darin Soper and one brother Maurice Soper. Funeral services will be 10 am Friday, October 14, 2016 at the First Christian Church in Columbus, KS with the Rev. Roger Beason and the Rev. Bob Colerick, officiating. Burial will be in the Park Cemetery in Columbus, KS. Pallbearers will be Earl Eddington, Leo Evans, Tom Epler, Dawson Soper, Robbie Carpino, Joe Pierson and Curt Crossland. Honorary pallbearers will be Don Broyles, Bud Rooney, Tom Pierson, John Issac, Paul Westervelt and Gene Mahan. The family will receive their friends from 6 to 8 pm Thursday at the Bath-Naylor Funeral Home in Columbus, KS. A memorial has been established to the First Christian Church in Columbus, KS in care of the funeral home. Condolences may be left at our web site www.bathnaylor.com.

The family of Jack D. Soper created this Life Tributes page to make it easy to share your memories.

Send flowers to the Soper family.