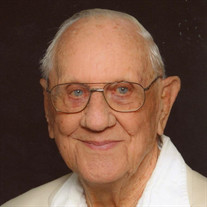 Jack Ames Hanney, of Frontenac, Kansas passed away on Monday, July 6th, in the presence of his wife of 71 years, Alyce. Jack was born October 12, 1922 in the Hiawatha, Kansas, home of parents Henry and Irene Hanney. In 1926 he was joined by baby sister Joan Adele. Jack graduated from Hiawatha high school and then attended Georgia State University on a work/study program that included work for the Georgia Power Company and on the Wats Bar Dam project on the Tennessee River until joining the U.S. Army air corps at age 20, serving as a radio operator in the North Africa and Italian campaigns. Upon his return to the states he enrolled at Rollins College in Winter Park, Florida, taking advantage of the GI bill and where he joined the Lamda Chi Alpha fraternity. From Rollins College Jack moved to Manhattan and enrolled at Kansas State seeking an electrical engineering degree. However, his entrance aptitude tests yielded that he should be pursuing an Industrial Arts degree instead. Before completing his degree he met the girl of his dreams, Alyce, at a New Year's eve dance in Hiawatha 1948 and they were married on February 23, 1949. After completing his degree in Industrial Arts in 1950 Jack taught high school math and science courses for 11 years in a number of rural Kansas communities until changing to a career as a computer operator for the U.S. Department of Agriculture in Kansas City starting in 1962. He served in this capacity until his retirement and eventual move to Pittsburg, Kansas. Jack was a member of both the Santa Fe and Oregon Trail associations and he and Alyce enjoyed traveling along the trails and visiting other historic sites, eventually covering all of the lower 48 states. Jack was also an incredible wood worker, designing and building furniture and decorative items shared among family members. Jack was preceded in death by his parents and his sister, Joan, as well as by son Brian Evan. He is survived by his wife Alyce of the home, sons Jere Alan (and wife Judy), Mark Steven and Paul Earnest (wife Darlene Brown), as well as grandchildren Jack DeWayne Hanney (and wife Katie of Columbia, MO) and Franchesca Brown-Hanney (Pittsburg) and great-grandchildren Benjamin, Ellie and Henry (Columbia, MO) as well as a number of nephews and nieces.

Jack Ames Hanney, of Frontenac, Kansas passed away on Monday, July 6th, in the presence of his wife of 71 years, Alyce. Jack was born October 12, 1922 in the Hiawatha, Kansas, home of parents Henry and Irene Hanney. In 1926 he was joined by... View Obituary & Service Information

The family of Jack Hanney created this Life Tributes page to make it easy to share your memories.

Jack Ames Hanney, of Frontenac, Kansas passed away on Monday,...

Send flowers to the Hanney family.