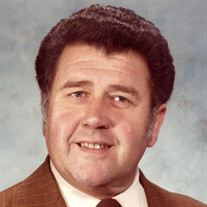 Jack Ronald Buzzard, 85, of rural Weir, went to be with the Lord on March 23, 2020 at Medicalodge in Pittsburg, Kansas. Jack, or “J. R.” as family called him, entered this life on June 29, 1934 at Racine, Missouri to Jack Roosevelt and Leah Frances Crawford Buzzard. He was raised on a farm near Seneca, Missouri and was a 1952 graduate of Seneca High School. He always had the desire to become teacher and work with children. After receiving his master degree in 1967 from Kansas State College of Pittsburg. Jack’s first teaching job was at Dennis, Kansas. For the next six years, he taught grades 5-8, as well as coaching both boys and girls in the major junior high competitive sports and was principal at Service Valley School in USD504. He then taught one year at Exter, Missouri. In 1975 Jack moved to Longton, Kansas to teach junior high students and was a principal for three years at Elk Valley Grade School USD283. While at Longton, he met his wife, Ella Jean Harrigan and they were married July 16, 1977 at Longton. They then ventured to Seneca, Kansas where Jack was principal of Corning Grade School and sixth grade teacher at Frankfort, Kansas in USD 380, retiring in 1995 after 33 years of teaching. His students affectionately called him “Mr. B.”. In 1997, Jack and Ella decided to return to southeast Kansas to be closer to family and to help take care of her aunt and her mother. They built a home near Weir. He was a member of St. Bridget’s Catholic Church in Scammon and was a member of the Knights of Columbus there. He enjoyed reading, taking care of the yard, traveling, and attending high school sports events. Jack and Ella had traveled to all the states except for three. Jack is survived by his wife, nephews, Mark Buzzard, Shawn Harrigan, Jason Thomas and Arron Thomas and niece Shelly Young. He was preceded in death by his parents and a brother, Francis L. Buzzard. Memorial Mass will be at a later date due to the coronavirus. Private Burial will take place at St. Bridget’s Cemetery in Scammon, KS with Fr. Jeremy Huser as Celebrant. In lieu of flowers the family asks expressions of sympathy to be in the form of memorials to the Harry Hynes Hospice and/or St. Bridget’s Building Fund. Friends may drop off or mail memorials to the Bath-Naylor Funeral Home 104 W. Main St. Weir, KS 66781. Condolences may be left at www.bathnaylor.com. Arrangement and services are under the direction of Bath-Naylor Funeral Home of Weir. KS.

The family of Jack Ronald Buzzard created this Life Tributes page to make it easy to share your memories.

Jack Ronald Buzzard, 85, of rural Weir, went to be with the Lord...

Send flowers to the Buzzard family.