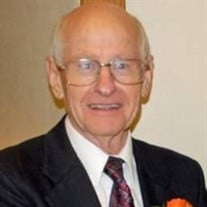 Jack Lee “Poppy” Armstrong 87, of Pittsburg, KS died 7:58pm Wednesday August 12, 2020 at the Carrington Place in Pittsburg, KS following an illness. Jack was born December 7, 1932 the son of George and Thelma (Tierney) Armstrong. He was a lifelong resident of Pittsburg and graduated from Pittsburg High School in 1951. Following high school he joined the United States Marine Corps earning the rank of Sergeant. He later earned his degree in Engineering at Pittsburg State University in 1957. On August 29, 1954 Jack married Doris Curry in Pittsburg, KS; she preceded him in death on November 31, 2019. Jack worked as an engineer for Dickey Clay in Pittsburg, KS; later Waddell and Reed as a Financial Advisor and Insurance Salesman and finally drove the SEKCAP INC Bus for Pre-School Children in Pittsburg, KS. Jack was of the Methodist Faith; member of the VFW Post # 1158; loved golfing, fishing and spending time with his grandkids and great-grandkids. Jack will be most remembered as a gentle, loving father and grandfather. Survivors include her children Lisa Mooney and husband Bruce of Pittsburg, KS, Karla Armstong of Pittsburg, KS and Jason Armstrong and wife Leann of Chicago, IL; granddaughter Melissa Mooney of Frontenac, KS; siblings Jim Armstrong and wife Judy of Walla Walla, WA and Joy Marsh of Idaho; great-grandchildren Jaxon Mooney and Dawsyn Mooney and several nieces and nephews. Jack was preceded in death by his parents, wife, grandson Casey Mooney and a brother Bob Armstrong. Per family’s wishes private ceremonies will take place at a later date at Garden of Memories Cemetery in Pittsburg, KS. Friends are encouraged to stop at the funeral home to sign the guest register book and pick up a memorial folder of Jack for remembrances. Memorials may be made to the Alzheimer's Association; these may be left at or mailed to the funeral home. Condolences may be left at www.bathnaylor.com. Arrangements and services are under the direction of Bath-Naylor Funeral Home of Pittsburg, KS.

The family of Jack Lee Armstrong created this Life Tributes page to make it easy to share your memories.

Send flowers to the Armstrong family.