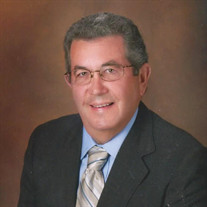 Henry Lee Stricklin (Hank), 82 of Weir died at 6:30 am Friday, May 6, 2022, at his home. He was born April 22, 1940 at Mt. Carmel Hospital in Pittsburg, KS to Willis Henry Stricklin and Kathryn (Martin) Stricklin. Henry lived most of his life in Weir and grew up working on his family dairy farm east of Weir. He married his childhood sweetheart, Saundra Shaw, December 27, 1959. Henry was the proud father of 3 children, daughter Brenda (Stricklin) Engelman and husband Gary of Weir, son David Stricklin and wife Robin of Weir, daughter Susan (Stricklin) Kuestersteffen and husband Bob of Basehor, KS along with 9 grandchildren and 7 great grandchildren. Henry graduated from Weir High School in 1958 and Pittsburg State University. He was a member of the Weir Methodist Church and was active throughout his life in Weir Civic Club, Cherokee Gun Club, Rural Water District #11, and served as a Board member or officer of each. Henry raised cattle with his son David. He enjoyed hunting, shooting, fishing, traveling and reading. He retired from Pittsburg State University after 30 years as an accountant in the Business Office in 1995 and traveled with his wife Saundra, as well as made deliveries for his son and son-in-law, Gary, at Trinity Steel and Pipe, Inc. Henry was preceded in death by his parents and daughter Brenda. He is survived by his wife, Saundra, of the home, son David, daughter Susan; a brother Willis Stricklin and his grandchildren and great grandchildren. After cremation, a Celebration of Life will be held Saturday May 21st at 10:00 am at the Weir Methodist Church, 410 S Jefferson in Weir, KS with Pastor Lindsey Clarke and Evangelist Aaron Williams officiating. There will be a lunch with family and friends following the services at the Weir Civic Center. Memorials may be made to the Weir Methodist Church building fund; these may be left at or mailed to the funeral home. Condolences may be left at www.bathnaylor.com. Private burial with the family at a later date.

Henry Lee Stricklin (Hank), 82 of Weir died at 6:30 am Friday, May 6, 2022, at his home. He was born April 22, 1940 at Mt. Carmel Hospital in Pittsburg, KS to Willis Henry Stricklin and Kathryn (Martin) Stricklin. Henry lived most of his life... View Obituary & Service Information

The family of Henry Lee "Hank" Stricklin created this Life Tributes page to make it easy to share your memories.

Send flowers to the Stricklin family.