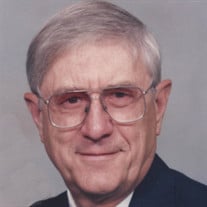 Henry G. Hessman, 87 of rural Pittsburg, KS died at 6:59 pm, Sunday, February 4, 2018 at the Medicalodge in Frontenac, KS. He was born August 20, 1930 in Windthorst, KS the son of Henry J. and Josephine (Kehl) Hessman. He graduated from Windthorst High School in 1948. On June 7, 1958 he was united in marriage to Mary Ann Seidl at the Sacred Heart Catholic Cathedral in Dodge City, KS; she survives of the home. Henry always had a love for learning and education. He attended Salt City Business College in Hutchinson, KS for accounting followed by Central College in Wichita as well as Oklahoma State University Technical Institute for data processing and programming. He worked as the IBM/IT manager for Fogarty News in Oklahoma City and Pittsburg KS and finally Bowlus School Supply in Pittsburg KS for many years. Henry also was a farmer and enjoyed ranching as a pastime. He was a member of the Sacred Heart and Our Lady of Lourdes Catholic Churches. He was a member of the Knights of Columbus and served on the St. Mary’s Cemetery maintenance crew. Additional survivors include three daughters: Elizabeth (Thomas) Talbot of Fredericksburg, VA, Rosemary Hessman of the home and Margaret (Gary) Dulek of Lenexa, KS; a son Michael (Jan) Hessman of Cedar Rapids, IA; a sister Adeline Hessman of Jetmore, KS along with seven grandchildren: Mary Ann & Kristen Talbot, Cara Liz & Kate Hessman and Katie & Andrew Dulek. He was preceded in death by his parents, two sisters: Marie Robbins & Rosalia Hessman and a brother Lucian Hessman. Mass of Christian Burial will be 10 am Saturday, February 10, 2018 at the Sacred Hearst Catholic Church in Frontenac with Fr. Thomas Stroot as Celebrant. Burial will follow in the Highland Park Cemetery in Pittsburg. Rosary will be at 6:30 pm Friday evening February 9 at the Friskel Funeral Home in Frontenac. Condolences may be left at www.friskelfuneralhome.com. In lieu of flowers, memorials may be made to the Sacred Heart Catholic Church and/or the SEK Humane Society; these may be left at or mailed to the funeral home. Services are under the direction of the Friskel Funeral Home of Frontenac.

Henry G. Hessman, 87 of rural Pittsburg, KS died at 6:59 pm, Sunday, February 4, 2018 at the Medicalodge in Frontenac, KS. He was born August 20, 1930 in Windthorst, KS the son of Henry J. and Josephine (Kehl) Hessman. He graduated from Windthorst... View Obituary & Service Information

The family of Henry G. Hessman created this Life Tributes page to make it easy to share your memories.

Send flowers to the Hessman family.