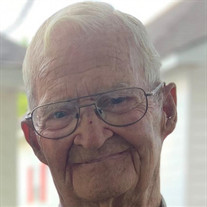 PITTSBURG, KS – Haskell O. “Hack” Burton, 93, of Pittsburg, died January 15, 2022 at Via Christi Hospital in Pittsburg, KS. He was born June 2, 1928 in Shady Point, OK to Allen and Winnie Cato Burton. He had lived in Pittsburg since 1953, moving from Panama, OK. He married Mildred Gleason on August 6, 1949 in Van Buren, AR. She preceded him in death on May 2, 2021. Mr. Burton was a Section Foreman for the Kansas City Southern Railroad for 30 years, retiring in 1993. He was a member of the Crawford County Church of Christ in Pittsburg, KS. The most important thing to Hack his whole life was taking care of his family. His most precious times were the times he could spend with his wife, his children, grandchildren and great grandchildren. He was well known for his work ethic, his generosity, his faith and his garden. Many of his co-workers still talk about his toughness, his strength, and his ability to outwork just about everyone. He cared for his sweet wife Millie for many years so they could stay together at home. They loved each other dearly for 72 years. Survivors include three daughters Wynema Glidewell of Columbia, MO, Millie Jane Spencer of Pittsburg, Martha Burton of Pittsburg, one son Roger Burton of Pittsburg, one sister Louise Robertson, 13 grandchildren, 23 great-grandchildren and one great-great-grandchild. He was preceded in death by his parents, wife, granddaughter Heather Huff, son Arnold Burton, two sisters Aileen Stewart and Cathryn Crase, an infant sister Barbara Burton, ½ brother Adrith Morton, brothers Allen Burton, Melvin Burton and Kenneth Burton. Funeral services will be 12 pm, Wednesday, January 19, 2022 at the Bath-Naylor Funeral Home, 522 S. Broadway in Pittsburg. The family will receive friends from 11am to 12pm, Wednesday, January 19, 2022 at the funeral home. Burial will be in the Crocker Cemetery, rural Pittsburg, KS. Pallbearers will be Bart Arnett, Marshall Arnett, Bobby Spencer, Colt Spencer, James Spencer, Will Smith, Tom French and Josh O’Brien. A memorial has been established in lieu of flowers to the St. Jude’s Hospital or the Alzheimer’s Foundation in care of the funeral home. Condolences may be left at our web site www.bathnaylor.com

The family of Haskell O. Burton created this Life Tributes page to make it easy to share your memories.

Send flowers to the Burton family.