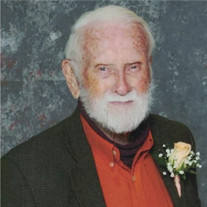 Harry E. Krug, Jr., 89, of Pittsburg, KS, passed away Wednesday, November 27, 2019, at Ascension Via Christi Hospital. Harry was born on August 20, 1930 in Oshkosh, Wisconsin, to Rev. Harry Krug and Mabel (Cutler) Krug. On June 6, 1953 he was united in marriage to Patricia Alarupi. Harry served in the United States Army from 1956 to 1958 in the 11th Armored Calvary in Germany. Harry received his BFA from the University of Wisconsin, Milwaukee and Master of Science Degree from the University of Wisconsin, Madison in 1956. Harry was a Professor Emeritus at Pittsburg State University, where he taught art for 37 years and was chairperson of the Department of Art. Harry was known for printmaking and his artwork has been shown at major galleries and juried exhibitions throughout the United States and Europe. His work is part of the permanent collection of the Wichita Art Museum, the Museum of Fine Art in Boston, The New York City Public Library, and the Library of Congress. In 1997, PSU honored his contribution to the Art Department by naming the gallery in Porter Hall “The Harry Krug Art Gallery”. During his retirement, Harry served on the Kansas Arts Commission. Harry was an avid outdoorsman who loved hiking, camping and canoeing. Throughout his life and into retirement, he spent many days planting trees on his property to build a wildlife refuge. He was also a lifelong learner, who always had a book in his hand or coat pocket. Harry enjoyed telling stories and loved a good philosophical debate. He is survived by his daughter, Kim Meyer and her husband, Ed of Pittsburg, KS; two sons, Craig Krug of Mulberry, KS, Mark Krug of Joplin, MO; four grandchildren, Kayla Meyer, Jadyn Meyer, Erin Hutchison, and Chris Hutchison; and two great-grandchildren, Julian and Camden Lett. He was preceded in death by his parents, wife and two sisters, Harriet Franzke and Rosalind Fenz. A private family celebration of life will be held this summer at his wildlife refuge. The family suggests memorials be given to the Harry Krug Art Gallery at Pittsburg State University. These may be left at or mailed to the Bath Naylor Funeral Home, 522 S. Broadway, Pittsburg, KS 66762. Friends may also leave condolences online at www.bathnaylor.com

The family of Harry E. Krug Jr. created this Life Tributes page to make it easy to share your memories.

Send flowers to the Krug family.