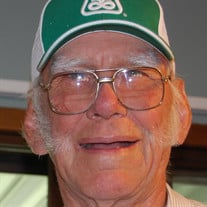 SCAMMON, KS – Harry Lewis Cage, 86, of rural Scammon, died March 22, 2017 at Via Christi Hospital in Pittsburg. He was born October 9, 1930 in Nita Yuma, Mississippi the son of James E. and Daisy L. Sanders Cage. He had lived at rural Scammon since August of 2005, moving from Harrison, Arkansas. Mr. Cage served in the United States Air Force, retiring after 20 years. He was a mechanic at Boeing Aircraft in Wichita, KS for over 20 years until his retirement. Membership was held in the Kansas Republican Party, American Legion, and National Rifle Association and he was an avid ham radio operator. Survivors include two sons Max Cage and Philip T. “Tom” Cage both of Colorado Springs, CO, one daughter Pat Wagner of Wichita, three brothers Dewitte Cage, Robert Cage and Nolan Cage, and three sisters Alice Smith, Barbara Decker and Daisy Johanson, 10 grandchildren, 11 great-grandchildren and six great-great-grandchildren. He was preceded in death by his parents, one son Harry L. Cage Jr., four brothers and one sister. Graveside services will be 2 pm, Saturday, April 1, 2017 at the Council Corners Cemetery in Cherokee County, KS with the Rev. Dennis Johnson, officiating. Full military honors will be conducted at the graveside. The family will receive their friends from 12:30 to 1:30 pm Saturday at the Bath-Naylor Funeral Home, 103 W. Main, Weir, KS 66781. A memorial has been established to the American Cancer Society in care of the funeral home. Condolences for the family may be left at our web site www.bathnaylor.com.

The family of Harry Lewis Cage created this Life Tributes page to make it easy to share your memories.

Send flowers to the Cage family.