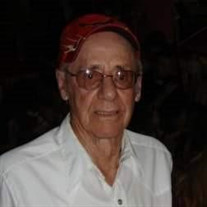 Harold “Harley” Wettstein, 100 of rural Pittsburg, KS died Monday February 17, 2020 at the Anderson County Hospital in Garnett, KS. He was born December 20, 1919 in Pittsburg, KS the son of Henry and Mary (May) Wettstein. Harold was inducted into the US Navy on July 7, 1944 and was honorably discharged January 27, 1946. He served aboard the USS Hutchins until it was damaged beyond repair during battle in the Asiatic Theater. He was then transferred to the USS Feland where he finished his tour of duty with rank of Seaman 1st Class. On December 19, 1949 he was united in marriage to Alberta M. Lyden; she preceded him in death on October 8, 2000. Harley was a carpenter for many years. He worked for Deil Construction and Bob Micheal Construction; he also was a hobby rancher and enjoyed working with his cattle. Survivors include 2 daughters: Patsy Badnin of Portland OR, Tonya (Angus) Duff of Overland Park, KS; three sons: Harold L. Wettstein and Donald (Susan) Wettstein both of Garnett, KS, Raymond K. Wettstein of Pittsburg, KS; a brother Fred Wettstein of Pittsburg, along with 12 grandchildren, 24 great grandchildren and 6 great-great grandchildren. He was preceded in death by his parents, wife Alberta, 9 siblings and a grandson Christopher Lee Wettstein. Funeral services will be 11am, Saturday, February 22, 2020 at the Bath-Naylor Funeral Home with Pastor Jim Tandy officiating. The family will receive friends at the funeral home from 10 am until service time on Saturday. Burial will follow in the Crocker Cemetery. Memorials may be made to the Humane Society and/or American Legion riders Chapter 156 these may be left at or mailed to the funeral home. Condolences may be left at www.bathnaylor.com.

The family of Harold "Harley" Wettstein created this Life Tributes page to make it easy to share your memories.

Send flowers to the Wettstein family.