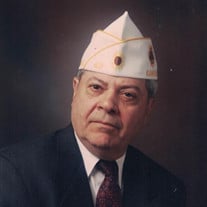 Gus Bosetti, 96, of Frontenac, KS passed away on December 10, 2020, at Arma Health and Rehab in Arma, KS. He was born on August 21, 1924 in Frontenac, KS, the son of Gus C. and Mary M. (Muti) Bosetti. Gus graduated from Frontenac High School in 1943. After high school Gus was drafted into the United States Army where he served 2 years in World War II. He held the rank of Staff Sargent. Gus married Rosemary Haigh in December of 1970 in Frontenac, she preceded him in death. He worked at Boeing Aircraft in Wichita, KS for five years in the quality control department followed by 30 years of employment by the Green Giant company in the sales division where he retired in 1986. During his employment at the Green Giant company, he received many meritorious awards for his accomplishments and for completing his assignments in an exemplary fashion. He was a member of the Sacred Heart Catholic Church and the Frontenac High School Education Foundation. He was best known for his involvement in the community and the American Legion Post #43. He was a member of the Frontenac American Legion for 39 years. After his retirement he served as the commander of John F. Derby Post #43 for 4 continuous years and many other elected offices throughout the years. On February 1, 1995 he was honored at a luncheon where he was given the Community Leadership Award by the Frontenac Rotary. Gus was a kind hearted, caring man who was a friend to all in the Frontenac community and surrounding area. He will be deeply missed. Gus is survived by Jan Heardt and husband Jim of Frontenac, KS, granddaughter; Jennifer White and husband Bill, great-grandaughter, Alex Lambright and husband Leroy, great-great grandson Lincoln, great-grandson Gage White, grandson Jason Heardt and wife Kelynn, great-grandchildren Ava and Hudson, several extended family members and friends and Kitty girl the cat. He is preceded in death by his parents, wife, two brothers; Albert and Sam Bosetti. A private mass will be held at 10 AM on Monday, December 14, 2020 at the Sacred Heart Catholic Church in Frontenac, KS. You can go to our website to view the live streaming of the service. Burial at Mt. Carmel Cemetery in Frontenac. An informal visitation will be held on Sunday, December 13, 2020 from 11-5 p.m.at the Friskel Funeral Home. The family suggests memorials be given to the Sacred Heart Catholic Church and/or the Arma Health and Rehab Activity Fund. These may be left at or mailed to Friskel Funeral Home, 230 East McKay Frontenac, KS 66763. Friends may leave condolences online at www.bathnaylor.com. Arrangements are under the direction of Friskel Funeral Home, Frontenac, KS.

Gus Bosetti, 96, of Frontenac, KS passed away on December 10, 2020, at Arma Health and Rehab in Arma, KS. He was born on August 21, 1924 in Frontenac, KS, the son of Gus C. and Mary M. (Muti) Bosetti. Gus graduated from Frontenac High School... View Obituary & Service Information

The family of Gus C. Bosetti created this Life Tributes page to make it easy to share your memories.

Send flowers to the Bosetti family.