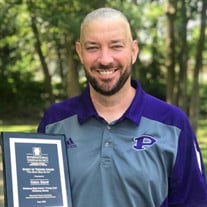 Greg Shaw, 51, of Pittsburg, died at home surrounded by his family on Dec. 12, 2020, after a year-long fight against Glioblastoma — an aggressive, malignant form of brain cancer. He was born on Feb. 17, 1969, to Janet and Dean Shaw in Springfield, Missouri. He attended Gardner-Edgerton High School in Gardner, Kansas, and began his lifelong love of theater. Competitive by nature, he also was active in sports during high school and his early adult years as an athlete and a coach, and was an avid Kansas Jayhawk fan. He married Angela Casey Shaw on Oct. 11, 1997, in Hutchinson, Kansas; they met in Lawrence at KU while performing in Rock Chalk Revue in 1989. He was the director, Angie was cast as the leading female. The ultimate theater relationship, it was the beginning of a life-long love. Anyone who knew Shaw knows that he “grew up in the restaurant business.” His parents owned and ran Blazers Restaurant, home of the infamous Blazer Burger, in Gardner. While Angie was in residency in Chicago, he was general manager of Govnor’s Pub. They moved back to Gardner while Angie finished her residency at KU Med and Greg took over running the family business. Though he attended the University of Kansas and was a lifelong Jayhawk supporter, he earned a bachelor’s degree in Management and Human Relations from MidAmerica Nazarene University in 1999 and a master’s degree in education/communications/theater from Pittsburg State University in 2006. Shaw and his family are true Jayhawk Basketball fans, and he traveled across the U.S. to watch his beloved Jayhawks. He also was an avid KC Royals and Chiefs fan. In 2007, he was hired as the theater director/teacher at Pittsburg High School and during his 13-year career there would produce an astounding 65 shows with his students and colleagues, Susan Laushman, Cooper Neil, Chuck Boyles and Denise Williams, including 25 shows in which he directed his daughter, McKenna. This team also founded the Musical and Repertory Theatre classes at PHS. PHS Theatre earned invitations to perform on the main stage at the Kansas State Thespian Festival and the International Thespian Festival a combined five times (“Crimes of the Heart,” “Band Geeks,” “Urinetown,” “Dog Sees God,” “Pippin”) and Shaw was part of the directing team for the Kansas State Thespian production of “Bring It On” that performed at state and Internationals. Since 2016, PHS Theatre earned more than 40 Jester Awards from Music Theatre Wichita, including Best Direction of Show for “Shrek,” “Seussical,” and “Little Mermaid.” Shaw created a social issue plays program at PHS with themes that youth face every day, including teen suicide, school violence, eating disorders, and more, helping PHS to earn both state and national recognition as the Kansas NEA Human and Civil Rights Award and as a Promising Practices by the Character Education Partnership. He also was named educator of the year on several occasions. He collaborated with Mt. Carmel Foundation to create the “Breakfast With Santa” program as a free gift to local families each December, featuring freshmen and sophomore cast and crew as a way to help them gain experience. Shaw also founded the Just Off Broadway summer theatre workshop program at Memorial Auditorium, in which he directed a cast and crew of middle school-aged youth from schools throughout the area in the junior version of musicals such as “High School Musical,” “All Shook Up,” “Legally Blonde,” and “Lion King.” Many graduates of his program have gone on to higher education in the performing arts and careers in related fields, of which he was very proud. He served on the Kansas Thespians Board of Directors, and each January since 2015 took one of the largest groups of student thespians from across the state to the state festival. He also directed numerous shows in the Kansas City area, including Shawnee Mission Theatre in the Park and Faust Theatre, and for Pittsburg Community Theatre at Memorial Auditorium. While at TTIP, he helped to found the TTIP Troupe, a group of high school-aged performers and technical staff which helped to launch the careers of numerous Kansas City based performers. He went on to direct more than 15 productions and was nominated for and won several Demi Awards. In 2017, he was named a finalist for the Tony Awards Excellence in Theatre Education Award and was nominated again in 2020 prior to the shutdown of Broadway and postponement of the Tony Awards. In December 2019, just a few weeks after he produced “Pippin” in Pittsburg, he underwent brain surgery and was diagnosed with Glioblastoma. In January 2020, he still made the trip to the Thespian Festival in Wichita to direct “Pippin” on the main stage to an audience of 2,000. He continued to teach and direct as long as he was able, including co-directing the all-school musical “Freaky Friday” in February 2020 with Jason Huffman while undergoing radiation and chemotherapy. In June 2020, he earned the International Thespian Society’s “Spirit of Thespis Award” and this fall was named a 2021 inductee to the Kansas Thespians Hall of Fame — an honor given to individuals who strive for excellence in theatre education, who go above and beyond expectations in developing a theatre program of excellence, and who have impacted Kansas Thespians in significant ways. He is survived by his wife, Dr. Angela Shaw, and two daughters, McKenna and Marley, of Pittsburg; his parents, Janet and Dean of Peoria, Arizona; his brother, Christopher (Kendra) of Ponte Vedra, Florida; his sister, Jana Shaw Fevurly (John) of Scottsdale, Arizona; 11 nieces and nephews; and hundreds of former students. Due to Covid-19 restrictions, Shaw chose cremation with a private family ceremony. There will be a Celebration of Life at a later, safer date yet to be determined. In lieu of flowers, the family suggests donations for the USD 250 Foundation (a scholarship in his honor will be established) or for Shawnee Mission Theatre in the Park. These may be sent to or left at Bath-Naylor Funeral Home, 522 S Broadway St., Pittsburg, KS, 66762. Applause, applause, applause, applause. Blackout. — 30 —

The family of Greg Shaw created this Life Tributes page to make it easy to share your memories.

Greg Shaw, 51, of Pittsburg, died at home surrounded by his family...

Send flowers to the Shaw family.