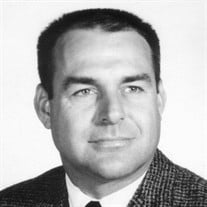 Glen E. Watt, 93 of Frontenac, KS passed away peacefully surrounded by loved ones on August 13, 2019. He was born July 27, 1926 in Arcadia, KS to Richard and Mae (Lyden) Watt. Glen graduated from Arcadia High School in 1944; he then signed a contract with St Louis Cardinals the same year and then was drafted by the US Navy in September of 1944. On February 1, 1945 he was united in marriage to Wilma M. Simons on his boot camp leave, later he returned to the Navy for Quarter Master School. He served aboard the USS General Mitchell in San Francisco, CA. He was honorably discharged from the Navy in May of 1946. Following the war he graduated from FSCC and went on to obtain his Bachelor of Science in Education from Kansas State Teachers College. After college he spent 8 years at the Kansas City Southern Lines as a First Aid responder. He also worked for Northwestern Mutual as an insurance agent for a very brief period. He began teaching and coaching at Frontenac High School in 1956 before retiring in 1991 after 34 years of teaching Health Science and coaching football, basketball, baseball, track, and volleyball. He managed American Legion Post 64 baseball team for several years. His passion led him to coach his son and his granddaughters at FHS. His love of teaching and coaching continued on after retirement as he was able to pass along his time, skill and lifelong knowledge to his great grandkids as he attended all of their sporting events. Glen “Poppy” was an avid gardener, traveler, fisherman, hunter and golfer throughout his life. His love for family was endless. He will be deeply missed by his family, friends and all who knew him. Survivors include his daughter Glenna D. Powers of the home and his son Robert R. Watt (Kelley) of Arma Kansas and former daughter in law of 45 yrs Snow Cussimanio of Pittsburg; 5 grandchildren Christy (Danny) Smith of Frontenac, Erika (Angelo) Ramfos of Bloomfield Hills, MI, Jessica J. O’Connor of Thayne, WY, Leah (James) McManis of Frontenac and Katy Mena of Frontenac; 13 great grandchildren Kyle, Elle and Madison Ramfos of MI, Jacob, Jillian and Jonah O’Connor of WY, Jordan and Acacia Mena of Frontenac, Taylor and Tanner Smith of Frontenac and Macie, Maia and Zane McManis also of Frontenac. He was preceded in death by his wife Wilma, brother Charles Watt, sister Dorothy Mae Pack, and granddaughter Jessica O’Connor. Funeral services will be 10am Saturday, August 17, 2019 at the Friskel Funeral Home with Father PJ Voegeli officiating. Burial will follow in the Garden of Memories Cemetery. Family will receive friends at the funeral home from 6-7pm Friday evening at the funeral home. Friends may also call at the funeral home at their convenience after 1pm Friday condolences may be left at www.friskelfuneralhome.com. Memorials may be made to the Glen & Wilma Watt Sports Scholarship fund these may be left at or mailed to the funeral home. Services and arrangements are under the direction of the Friskel Funeral Home 230 E. McKay Frontenac, KS.

Glen E. Watt, 93 of Frontenac, KS passed away peacefully surrounded by loved ones on August 13, 2019. He was born July 27, 1926 in Arcadia, KS to Richard and Mae (Lyden) Watt. Glen graduated from Arcadia High School in 1944; he then signed... View Obituary & Service Information

The family of Glen E. Watt created this Life Tributes page to make it easy to share your memories.

Send flowers to the Watt family.