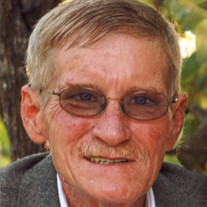 Glen O. Harris, 75, of Frontenac, passed away Friday, October 15, 2016, at 4:55 AM at his home, with his wife at his side. This ended a 20 yr. long battle with heart disease. He was born November 14, 1940, in Pittsburg, KS to Paul G. and Zella C. (Miller) Harris. He was a 1958 graduate of Pittsburg High School. He was married to his across the alley friend Lois M. Tripp on September 5, 1959, at St. John Lutheran Church in Pittsburg, KS. They had recently celebrated 57 years of marriage. To this union was born three children, Lorre, Scott and Eric. Mr. Harris worked first for Pittcraft, then for W.S. Dickey Clay Research Lab, then for Castlegate Door Co. (now Masonite). He retired, due to ill health in 1994. He was a past president of the Pittsburg High Football Boosters, AARP, NRA, and a former Little League and softball coach. He loved doing anything he could do with Lois, such as fishing, bowling, softball, cycle riding, golf, and of late going to the casino. He loved and is survived by a daughter, Lorre Beasley of Frontenac, two sons, Scott Harris (Pamala Blessent) of Fayetteville, AR., Dr. Eric Harris (Tara Gronquist) of Carl Junction, MO; A sister, Sherry (Jim) Thompson of Thomson, GA; 6 grandchildren including: Kenneth, Kristopher and William Stephens of Frontenac, Carleigh (Jonathan) Phillips of Fayetteville, AR, Christian (Karissa) Harris of Lakeland, FL and Sydney Harris of Carl Junction, MO. Also surviving are 8 great-grandchildren, including Hunter, Hope, Hayden & Holden of Carl Junction, MO. and Shawn, Anna, Kris, Jr. & Kylie Stephens of Frontenac. Along with 11 nieces and nephews. Visitation will be at 10 AM, Friday, Oct. 21, 2016 at St. John Lutheran Church with Memorial services to follow at 11 AM. In lieu of flowers, the family requests that memorials be made to St. John Lutheran Memorial Fund. Condolences may be left at www.friskelfuneralhome.com. Services and Cremation arrangements by Friskel Funeral Home, Frontenac, KS.

The family of Glen O. Harris created this Life Tributes page to make it easy to share your memories.