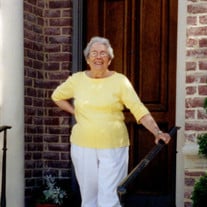 Gladys Lavon Cunnigham, of Dallas, Texas passed away on Sunday, September 16, 2018-at the age of 99. She was born March 10, 1919 in Beulah, Kansas, the daughter of the late George and Mabel (nee Bowman) Bailey. She was the middle of five children; three brothers, Otto, Leo, Merle and sister, Lila Dabalack who all preceded her in death. Gladys married the love of her life, Keith in 1939. Keith preceded her in death August 3, 1992. Keith and Gladys briefly lived in Colorado before continuing west to the San Fernando Valley. They arrived in California shortly before the outbreak of WWII. Gladys worked at Lockheed on the electrical wiring of B17’s bombers but later transferred to their Accounting Department. After leaving Lockheed, she became a licensed real estate broker. She also owned an accounting business. She worked for many years at Wells Industries and was a Member of the Board. Gladys was listed in the 1966 edition of “Who’s Who of American Women.” She was also employed by the Ebensteiner Company as an accountant; retiring in 1983. While with Ebensteiner, Gladys expanded her life-time commitment to community service as a board member of ‘The Hospice of the Canyon’, Mrs. Ebensteiner’s charity. She was also a longtime volunteer with Phi Delta Sigma Service Organization and the United Cerebral Palsy/Spastic Children’s Foundation where she was Grand President and State President, twice. Keith and Gladys loved to travel. They traveled abroad as well as circling the U.S., Canada and Mexico in RV’s with close friends. Even after Keith’s passing, Gladys continued her love of travel. She visited friends and family scattered across the country. She traveled to Alaska, and attended the Hot Air Balloon Festival in New Mexico. At age 85, she accompanied her grandniece on a trip to Ireland. In 2001, she decided to move to Texas in order to be closer to her family. Gladys is survived by her sister-in-law Rose Bailey of Girard, Ks. and many nieces and nephews, grandnieces and grandnephews, and wonderful friends. In addition to her parents, husband, and siblings, she was preceded in death by sisters-in-law, Jessie Bailey, Evelyn Bailey, Fern Bailey, and brother-in-law, Albin Dabalack. A memorial to celebrate Gladys’ life will be held at Sparkman / Hillcrest Funeral Home, 7405 West Northwest Highway, Dallas, TX at 3pm Friday, September 21, 2018. The family will receive friends from 1 to 3 pm, Friday, September 21, 2018 at the funeral home in Dallas, TX. The funeral will be held at Bath Naylor Funeral Home, 104 W. Main Street, PO Box 337, Weir, Kansas 66781 at 3 pm, Wednesday, September 26, 2018. The family will receive friends from 1 to 3pm Wednesday, September 26, 2018 at the funeral home in Weir. Following the service, interment will be at Hosey Hill Cemetery in Weir, Kansas. In lieu of flowers, those wishing to remember Gladys in a special way may direct memorials in her name to a charity of your choice. Condolences may be left at our web site www.bathnaylor.com.

Gladys Lavon Cunnigham, of Dallas, Texas passed away on Sunday, September 16, 2018-at the age of 99. She was born March 10, 1919 in Beulah, Kansas, the daughter of the late George and Mabel (nee Bowman) Bailey. She was the middle of five children;... View Obituary & Service Information

The family of Gladys L Cunningham created this Life Tributes page to make it easy to share your memories.

Gladys Lavon Cunnigham, of Dallas, Texas passed away on Sunday,...

Send flowers to the Cunningham family.