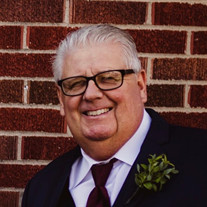 George Michael Burns of Girard, Kansas died on August 1, 2020 in Eudora, Kansas after an extensive two year battle with prostate cancer. George was born in Pforzheim, West Germany on April 20th, 1958 and adopted by George and Mina Burns of Arma, Kansas. He graduated from Northeast High School in May 1976 and attended Pittsburg State University graduating from the Vocational Technical Department in May 1978. On August 2nd, 1980 he was joined in marriage to Mary Joeen Wilson at the First Presbyterian Church of Girard. He was employed by Mt. Carmel Medical Center, later Via Christi, for 43 years retiring in April 2019 as Nutritional Services Director. During his time at Mt. Carmel he was employee of the month several times. Additionally, he received the Via Christi Ministry and Mission award in 2002 for his contributions at the Pittsburg Health Resource Center establishing and coordinating meal planning. He was a member of the former First Presbyterian Church of Girard and had been baptized by the Catholic Church as an infant in West Germany. Survivors include: Wife of the home, Mary Joeen Burns; his son Adam and Brandy Burns of Eudora, Kansas; his daughter, Heidi Burns attending the University of Kansas in Lawrence, Kansas; granddaughters Ansley Burns and Lennon Burns of Eudora, Kansas; his mother-in-law Beverly Wilson of Girard, Kansas; brother-in-law and sister-in-law Scott and Beth Wilson of Girard, Kansas; niece Maria Walczak of San Diego, California; nephews Eric Wilson of the United States Naval Academy in Annapolis, Maryland and Seth Wilson of Girard, Kansas; his beloved dachshund, Liesl Burns; and numerous cousins in the Southeast Kansas area. He was preceded in death by his parents George and Mina Burns and brother Ronald Burns of Arma, Kansas. As per his wishes, no services will be held. His cremains will be partially scattered at his treasured hunting and fishing location, and the rest will be buried at Hosey Hill Cemetery in Weir, Kansas at a later date. The family requests all donations be made to the KU Cancer Center Comprehensive Account, the Cancer Research Gift Fund or the KU Cancer Center Drug Discovery Innovation. Condolences may be left at www.bathnaylor.com. Cremation arrangements are by Bath-Naylor Funeral Home 522 S. Broadway, Pittsburg, KS 66762

George Michael Burns of Girard, Kansas died on August 1, 2020 in Eudora, Kansas after an extensive two year battle with prostate cancer. George was born in Pforzheim, West Germany on April 20th, 1958 and adopted by George and Mina Burns of... View Obituary & Service Information

The family of George Michael Burns created this Life Tributes page to make it easy to share your memories.

Send flowers to the Burns family.