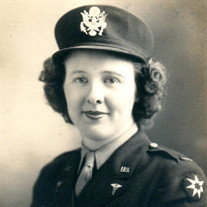 Genevieve Elnora Ristau 94, of Pittsburg, KS died 10:00pm Thursday February 8, 2018 at the Arma Health and Rehab Center in Arma, KS following an illness. Genevieve was born August 27, 1923 in Midway, KS the daughter of Ernest and Maude (Redd) Robison. She was a lifelong resident of the area and was a graduate of Cherokee High School in 1940. She later served her country in the United States Army as a Nurse in Japan from April 1944 until November 1946 during WWII. After her military service she took nursing classes at Pittsburg State University. On April 10, 1946 Genevieve married Harold Dean Ristau in Girard, KS; he preceded her in death on November 27, 1995. Genevieve worked at the Mt. Carmel Hospital in the Nursery for many years and later the Crawford County Health Department. Genevieve was a member of the Methodist Church in Pittsburg, KS; American Legion Pittsburg, KS for 70 years; she enjoyed raising and caring for her Shetland Ponies; enjoyed the outdoors and taking care of her Rose Bushes. Survivors include her son David Ristau and wife Rosanna of McCune, KS; sister Virginia Moore of Pittsburg, KS; daughter-in-law Cheryl Ristau of Pittsburg, KS; grandchildren Stephanie Ristau of Pittsburg, KS, Lindsay Baima of Louisburg, KS, Mindy Proffitt and husband Daniel of Pittsburg, KS and Stephanie Backhus of Blue Springs, MO; great-grandchildren Conner, Landon and Reed Proffitt and Macie and Kenley Baima. Genevieve was preceded in death by her husband, parents, son Steve Ristau, infant grandson Steven Ristau Jr. and a brother Elmer Robison. Funeral Services will be 11:00am Tuesday February 13, 2018 at the Bath-Naylor Funeral Home in Pittsburg, KS with Pastor Randy Woods officiating. Family will receive friends from 10-11:00am prior to the funeral at the funeral home. Burial will follow at the Highland Park Cemetery in Pittsburg, KS. Informal visitation from 12-5:00pm Monday February 12, 2018 at the Bath-Naylor Funeral Home in Pittsburg, KS. In lieu of flowers the family asks expressions of sympathy to be in the form or memorials to the Pittsburg American Legion. Friends may drop off or mail memorials to Bath-Naylor Funeral Home 522 S. Broadway Pittsburg, KS 66762. E-mail condolences may be left at www.bathnaylor.com. Arrangements by Bath-Naylor Funeral Home of Pittsburg, KS.

The family of Genevieve Elnora Ristau created this Life Tributes page to make it easy to share your memories.

Send flowers to the Ristau family.