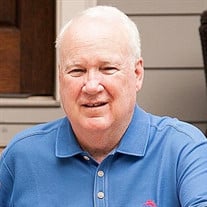 Gary Lee Hoffman 75, of Overland Park, KS former longtime resident of Pittsburg, KS died 6:27am Saturday August 24, 2019 at the St. Joseph Place in Overland Park, KS following an illness. Gary was born August 21, 1944 in Kansas City, KS the son of Leonard C. and Agnes R. (O’Connor) Hoffman. He was raised in DeSoto, KS and attended DeSoto Public Schools. . He later attended Donnelly Junior College. Gary was a Veteran of the Army serving his country in Vietnam. On June 1, 1968 Gary married Sandra K. Wichman at the Holy Family Catholic Church in Eudora, KS; she survives at the home. Gary worked most of his life as a salesman; businesses including Paxton Lumber Company, Bowlus Sporting Goods and School Supply, Jake’s Fireworks and finally Ettingers where he retired. Gary was a long time member of the Our Lady of Lourdes Catholic Church in Pittsburg, KS; current member of the Church of the Ascension in Overland Park, KS; a member of the Knights of Columbus; VFW and will be most remembered as an avid sports fan that loved to support local teams. He especially enjoyed spending time with his grandchildren. Survivors include his wife; sons Jason Hoffman and wife Christina of Overland Park, KS and Jeremy Hoffman and wife Melanie of Atlanta, GA; brothers Larry Hoffman and wife Patty of El Macero, CA, John Hoffman of Prairie Village, KS, Jim Hoffman and wife Lori of Linwood, KS and Brent Hoffman of Boulevard, CA and grandchildren Sydney, Brady and Hudson Hoffman. Gary was preceded in death by his parents. Memorial Mass of Christian Burial will be 10:00am Saturday September 7, 2019 at the Our Lady of Lourdes Catholic Church in Pittsburg, KS with Fr. Dan Lorimer as celebrant. Burial will be at a private date at the Eudora City Cemetery in Eudora, KS. Rosary will be recited at 6:00pm Friday September 6, 2019 at the Bath-Naylor Funeral Home in Pittsburg, KS; family will receive friends immediately following the rosary. In lieu of flowers the family asks expressions of sympathy to be in the form of memorials to the Michael J. Fox Foundation for Parkinson’s Research. Friends may drop off or mail memorials to Bath-Naylor Funeral Home 522 S. Broadway Pittsburg, KS 66762. Condolences may be left at www.bathnaylor.com.

The family of Gary Lee Hoffman created this Life Tributes page to make it easy to share your memories.

Send flowers to the Hoffman family.