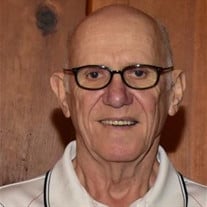 Gary Lee Cassidy passed away Saturday December 17 at his home in Scammon, KS after a yearlong battle with melanoma. Gary was born September 4, 1943 in Chicago, IL the son of Marvin and Dagmar Cassidy. His family moved to Scammon, KS when he was in elementary school. He Graduated from Cherokee County Rural High School with the class of 1961. While in high school he was a star athlete participating in baseball, football, basketball and track & field. After graduation, he attended KU on a baseball scholarship. In 1968, he joined the United States Air Force and was a member of the American Legion upon his honorable discharge. While in the Air Force he played softball on the fast pitch ball team, and winter basketball traveling throughout the United States. On July 26, 1968 he married Carolyn Cooper in Columbus, KS. He worked at the Gulf Oil Company Jayhawk plant in Riverton, KS and was a board member of the Great Plains Federal Credit Union. He was then promoted and went to work with Gulf Chemical in both Pennsylvania and Ohio before moving to Texas to work for Tropicana Fuels, Triple S Dynamics, and Gym-N-I Playgrounds. After 13 years in Texas he returned to Scammon and worked for Walmart for the next 27 years. Gary loved fishing, hunting, baseball games and hunting with his grandson Kable and gardening with his granddaughter Kennedy. Gary is survived by his wife Carolyn, his daughters Kyra Reichardt and husband Brett, of Columbus, KS; Katrina Cassidy and husband Rob DeStasio of Newport News, VA; and son Craig Cassidy and wife Karon of Pearland, TX. He has two grandchildren, Kable and Kennedy Reichardt of Columbus. One brother Kenneth Cassidy of Scammon, two nephews Jeff Cassidy and wife Julie, children Lauren, Morgan and Patrick of Columbus, Darin Cassidy and wife Theresa, children Peyton, Ashlyn and Kinsey of Scammon ,and niece Kris Cassidy of Scammon The family will host A Celebration of Life for friends and family Friday, December 23 from 6-8pm at his daughter home at 1616 W Maple Columbus, KS. In Lieu of flowers the family requests donations to either the Keith Reeves American Legion in Columbus, KS or the Presbyterian youth group Scammon, KS.

Gary Lee Cassidy passed away Saturday December 17 at his home in Scammon, KS after a yearlong battle with melanoma. Gary was born September 4, 1943 in Chicago, IL the son of Marvin and Dagmar Cassidy. His family moved to Scammon, KS when he... View Obituary & Service Information

The family of Gary Lee Cassidy created this Life Tributes page to make it easy to share your memories.

Gary Lee Cassidy passed away Saturday December 17 at his home...

Send flowers to the Cassidy family.