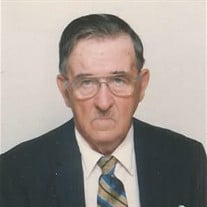 PITTSBURG, KS – Franklin Eugene “Gene” Benskin Sr., 91, of Pittsburg, died December 19, 2016 at Via Christi Hospital in Pittsburg of an illness. He was born April 14, 1925 in Arcadia, KS the son of Raymond Herman and Ella Terrill Benskin. He had been a resident of Pittsburg since 1949 and was reared in the Ft. Scott and Arcadia area. He attended Ft. Scott public schools. He married Dorothy White on July 31, 1943 in Ft. Scott, KS. Mr. Benskin at a young age worked for the Frisco Railroad and Goodlander Mill. After they moved to Pittsburg he worked for the Calhoun Lumber Company in Pittsburg for 27 years. After the lumberyard closed he went to work in 1978 for the City of Pittsburg on the street department, working there for 11 years before retiring in 1989. Gene loved to fish, hunt, garden and work with wood. He bought and sold antiques, then started building dog houses as long as his health permitted. Survivors include his wife Dorothy of the home in Pittsburg, two daughters Carol Jean Beckman of Chandler, OK and Linda Faye Hughes of Pittsburg, one son Frank Eugene Benskin Jr. of Springfield, MO, one sister Bonnie Pendergraft of Springfield, MO, 10 grandchildren, 21 great-grandchildren and 12 great great-grandchildren He was preceded in death by his parents, two sons Steven Dale Benskin and Mark Allan Benskin, three sisters Hattie Riggensburg, Helen Arthur and Alean Kriminger. Funeral services will be 2 pm Wednesday, December 28, 2016 at the Bath-Naylor Funeral Home, 522 S. Broadway in Pittsburg, with the Rev. Daryl Gaddy, officiating. Pallbearers will be Jerry Pendergraft, Charles Beckman Sr., Charles Beckman Jr., Michael McCarty, Brian Benskin and Colby Vaughn. Burial will be in the Crocker Cemetery, Pittsburg. The family will receive their friends from 1 to 2 pm Wednesday prior to service time at the funeral home. Friends may call at the Bath-Naylor Funeral Home in Pittsburg at their convenience from 1 to 5 pm on Tuesday, December 27, 2016. Condolences may be left at our web site www.bathnaylor.com.

The family of Franklin Eugene "Gene" Benskin Sr. created this Life Tributes page to make it easy to share your memories.

Send flowers to the Benskin family.