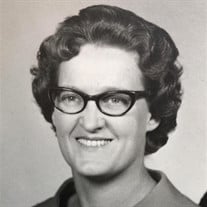 PITTSBURG, KS - Mary Evelyn Alldredge Baze , 93, of Pittsburg, died at 9:25pm Thursday May 17th at Medicalodges in Pittsburg After a short illness. She was born on December 20, 1924 in Teague, Texas, the daughter of Leonard and Eugenia Alldredge. She graduated from Aldine Texas High School in 1942 and completed aluminum fabrication training later that year. She became a "Rosie the Riveter" constructing B17's and P38's in Dallas and later at Boeing in Seattle Washington. Evelyn married Warren Baze in late 1943 in Seattle Washington and traveled to meet her sailor husband in ports on both coasts. Evelyn settled in Hutchinson Kansas when her husband was stationed at the naval Air station there at the end of the war. Warren and Evelyn had three sons in Hutchinson; Jim Baze and his wife Chris, Lawrence Ks., Jerry Baze and his wife Donna, Pittsburg ks., And Phillip Baze and his wife Elaine of Jasper Tennessee. Evelyn Baze developed an interest in furniture refinishing. She turned this interest into a successful business which she pursued actively until her husband retired. She and her husband enjoyed traveling throughout the country in their travel trailer and were very active in several camping travel organizations. In 1990 Evelyn and Warren moved to Pittsburg Kansas to be close to their son , Jerry Baze. Evelyn was active in her church and taught a Sunday school class for many years. She was a member of the First Church of the Nazarene in Pittsburg. Evelyn loved to study and teach the Bible throughout her life. Evelyn was preceded in death by her husband. She is survived by her sons; sisters Maurine Shane of San Antonio Texas and Virginia Levee of Conroe, Texas; two brothers, Albert Alldredge of Huntsville Texas and Charles Alldredge of Pea Ridge Arkansas. She is also a grandmother of 4, and a great grandmother of 3. A Memorial reception will be held from 1-3 pm on Saturday June 9th at the Bath-Naylor Funeral Home and Crematory, 522 S. Broadway in Pittsburg, KS. In lieu of flowers, please make contributions in memory of Evelyn Baze to the Dementia Society of America by mail to PO Box 600, Doylestown, PA 18901, or online. Arrangements are by the Bath-Naylor Funeral Home & Crematory , 522 S. Broadway in Pittsburg Kansas. Condolences may be left at our web site www.bathnaylor.com.

PITTSBURG, KS - Mary Evelyn Alldredge Baze , 93, of Pittsburg, died at 9:25pm Thursday May 17th at Medicalodges in Pittsburg After a short illness. She was born on December 20, 1924 in Teague, Texas, the daughter of Leonard and Eugenia Alldredge. She... View Obituary & Service Information

The family of Evelyn Baze created this Life Tributes page to make it easy to share your memories.

Send flowers to the Baze family.