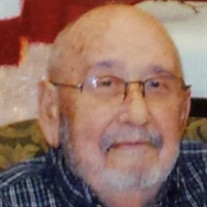 Eugene L. Dochow, 88, resident of Columbus, Kansas, passed away November 27, 2018 at Mercy Hospital in Joplin, Missouri. He was born May 24, 1930 in Jamestown Rural, Kansas. The son of Boyd and Gertrude (Spicher) Dochow. He was a graduate from Concordia High. After high school he joined the U.S Army and fought in the Korean War, upon his return he began his education at Emporia State, earning a Bachelor’s degree. Then he continued his education at Pitt State University where he earned a Master’s in Science and was a member of Phi Sigma Epsilon Social Society. In 1959 he married Norma Jean Wells, she resides at the home. Eugene worked for the Olathe School district for 5 years, Columbus School district for 31 years as a teacher in the Vocational department. He loved all of his students and enjoyed keeping in touch with them after graduation. He was a lifelong member of the Columbus Methodist Church, President of Chamber of Commerce in 1979, Charter member of the Distributive Education Clubs of America’s Hall of Fame and he was the Business Division President of the Kansas Vocational Association. Eugene was a Chris award recipient and he was inducted into the Columbus Educator Hall of Fame. He was a board member of the Cherokee County Ambulance since 1980, member of the Keith Reeves American Legion Post #3 and the V.F.W. Eugene loved spending time with his friends, family and his dogs. He never met a stranger and always had a smile for everyone. Survivors include wife, Norma Dochow of Columbus, KS, sister; Carol Creely of Long Island, New York and several nieces and nephews. Eugene was preceded in death by his parents, 2 brothers; Jerry Dochow, Loren Dochow and 2 sisters; Daisy Dochow and Joan Passmore. Funeral Services will be 2:00pm Monday, December 3, 2018 at the Columbus Methodist Church in Columbus, KS with Pastor Ron Johnson officiating. Burial will follow at the Oswego Cemetery in Oswego, KS. Friends may call after 11 am, Sunday, December 2, 2018 at their own convenience. In lieu of flowers, the family suggests memorials to be sent to the Columbus Methodist Church or The Columbus Community Foundation for a Vocational Scholarship. Condolences may be left at www.bathnaylor.com. Arrangements and services are under the direction of Bath-Naylor Funeral Home of Columbus, KS.

Eugene L. Dochow, 88, resident of Columbus, Kansas, passed away November 27, 2018 at Mercy Hospital in Joplin, Missouri. He was born May 24, 1930 in Jamestown Rural, Kansas. The son of Boyd and Gertrude (Spicher) Dochow. He was a graduate... View Obituary & Service Information

The family of Eugene L. Dochow created this Life Tributes page to make it easy to share your memories.

Send flowers to the Dochow family.