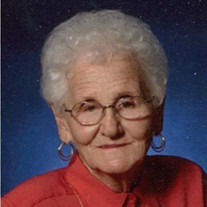 Emma Angela Stefanoni, 101, of Frontenac, Kansas, died at 5:35 a.m. Wednesday, Sept. 20, 2017, at Via Christi Village in Pittsburg, Kansas. She was born on March 31, 1916, in Frontenac, to John Kolar and Angela Wahcic. After her mother’s early death, she was raised by her godparents, Frank and Julia Markovitz. It was Julia who instilled in Emma a love for cooking that was lifelong, to the benefit of a large family and countless friends. Emma attended Frontenac schools and in 1934, graduated from Frontenac High School as valedictorian of her class. As a young adult, she worked at the Steinberg necktie factory in Kansas City, Missouri, and at a leather factory in Joplin, Missouri. On Nov. 16, 1940, she married Emile Stefanoni in Frontenac, where they lived the majority of their married life. Emma was a single parent while Emile served in the Pacific Theatre during World War II. Emma also kept meticulous accounting records for Emile and his brother Albert, who together owned the Frontenac Garage, an auto body repair shop and towing business, for many years. She was a longtime member of Sacred Heart Catholic Church, where she was involved in the Sacred Heart Altar Society until her age and health prohibited it. She was well known for serving up home-cooked specialties like polenta, potica cake and French cookies, which she made dozens of each winter to give away. Each fall from 1945 until she was 95, Emma handcrafted hundreds of homemade pastas called cappelletti for family to enjoy at Thanksgiving and Christmas. Into her 90s, Emma remained an avid walker, logging two miles daily. If weather was inclement, she’d do laps inside the Frontenac Garage next door to her house. Emma was preceded in death by her husband, Emile, in 2006, and her brother-in-law, Albert Stefanoni, in 2012. Survivors include a son, Robert Allan Stefanoni and his wife, Cynthia Holliday Stefanoni of Frontenac; a daughter, Eleanor Staples of Overland Park; grandchildren Carmen Letcher and her husband Micky of Olathe, Curtis Hoyt and his wife Jennifer of Olathe, Brad Stefanoni and his wife Andra, of Pittsburg, and Angie Troutman and her husband Jon of Spring Hill; and great-grandchildren Dominic and Jack Stefanoni, Lindsay and Ryan Hoyt, Brian Letcher, and J.D., Jaxon, and Jess Troutman. They all called her “Nona.” Funeral mass will be 10 a.m. Monday at Sacred Heart Catholic Church in Frontenac with Father Thomas Stroot as Celebrant. Burial will follow at Mt. Carmel Cemetery in Frontenac. A parish rosary will be recited at 6 p.m. Sunday at Friskel Funeral Home where family will receive friends following the rosary. The family suggests memorials be made to the Mt. Carmel Cemetery “Maintenance” Fund and/or the Sacred Heart Altar Society, these may be left at or mailed to the funeral home. Condolences may be left at www.friskelfuneralhome.com. Services and arrangements are under the direction of the Friskel Funeral Home in Frontenac, KS.

The family of Emma Angela Stefanoni created this Life Tributes page to make it easy to share your memories.

Send flowers to the Stefanoni family.