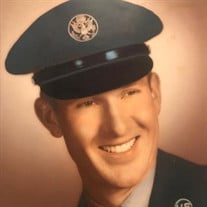 Elbert “Jean” Morey, 89, of McCune, KS, died Wednesday, December 5, 2018 at his home in McCune. He was born June 28, 1929 in Rural Frontenac, the son of Evert J and Gertrude Pearl (Smith) Morey. He has been a resident of Fort Scott, Pittsburg and Parsons Kansas and has lived in McCune since 1969. He married Mary Lou Nevin on April 25, 1952 in Girard, KS, she precedes him in death. Jean was a Corporal in the Air Force based in Amarillo, TX. He was a member of the McCune First United Methodist Church, Lions Club, Shriners, Frontenac American Legion and the NRA. He and his wife, Mary, were owner/operators of the Morey Grocery Store in McCune from 1969 to 1979. He was a member of the Pipe Fitters Union before he retired. Jean had a great sense of humor. He loved to tell folks that he graduated from Yale. Then he would hesitate and add, Yale elementary! Never failed to get a chuckle. He will be greatly missed by family and many, many friends. Survivors include three sons, Larry (Cathy) Morey of Strafford, Mo, Ellick (Phyllis) Morey of Rogers, AR, Brian (Linda) Morey of Marshall, TX; Galina Morey, widow of Dan Morey; seven grandchildren, Jarod (Ginger) Morey, Adam Morey, Daniel Morey (Caitlynn), Brandy (James) Scott, Andrea (Byron III) Johncox, Jessica (Bryan) Nelson, and Anastasia Katagarova; and eleven great-grandchildren, Logan Morey, Brendan Morey, Mila Nelson, Byron Johncox, Clayton Johncox, Brooklyn Johncox, Peyton Powers, PJ Powers, PJ Katagarova and Braden Scott. He was preceded in death by his wife, Mary; parents; son, Dan Morey; grandson, Joshua Morey; five brothers, Earl, Carl, Merle, Ray, and Roy; and a sister, Thurma Masser. Memorial Services will be held at 2:00 pm, Saturday, December 15, 2018, at Bath-Naylor Funeral Home in Pittsburg, Kansas. The family will receive friends from 1 pm to 2pm, prior to the Memorial Service on Saturday at Bath-Naylor Funeral Home. Following the service, the family would like to invited friends for a gathering at the McCune Library from 4:00 pm to 6:30 pm. In lieu of flowers, memorials may be made to the McCune Library, or the McCune Lions Club. Services and arrangements are under the direction of the Bath-Naylor Funeral Home of Pittsburg, Kansas.

The family of Elbert Jean Morey created this Life Tributes page to make it easy to share your memories.

Send flowers to the Morey family.