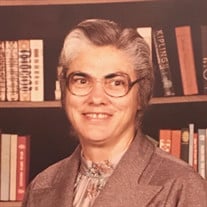 Elaine Preston 97 of Riverton, Kansas formerly of Eolia, Missouri passed away Sunday February 13, 2022. She was born October 19, 1924 in Gadston, Texas to W.A. and Mattie Haygood Preston. Elaine lived in Texas until 1957 moving to Eolia, Missouri where she lived until she moved along with her daughter and son-in-law to Riverton, Kansas in 2018. She attended the Whiteside Holiness Church in Whiteside, Missouri for 61 years and the Scammon Holiness Mission after moving to Riverton, Kansas. She was a seamstress and an avid gardener. She played the piano for church services, revivals and camp meetings and sang with her daughter until her health would not permit. She was saved October 29, 1953 and sanctified to the will of God April 8, 1955. Survivors include her daughter; Charlotte (Jim) Elmore of Riverton, Kansas. Three Grandchildren; Steve Baze, Jason Baze and Duane Elmore. Five Great- grandchildren; Triston Baze, Terran Baze, Jason Baze Jr., Samuel Elmore and Andrew Elmore. Two Great-great-grandchildren; Khalil and Khonir. Elaine was preceded in death by her parents, Son; Steve Baze, five sisters; Mae, Octavia, Lou, Sue and June, four brothers; Bill, David, Paul, John and a host of nieces and nephews. Funeral services will be at 7:00 p.m. Thursday February 17, 2022 with Rev. Sammy Lorton officiating. Visitation will be from 5:00 p.m. until time of services at Bath-Naylor Funeral Home 522 S. Broadway Pittsburg, Kansas 66762. Burial will be 2:00 p.m. Tuesday February 22, 2022 at Lake Creek Cemetery in Lake Creek, Texas. Memorials may be made to the Scammon Holiness Mission Building Fund in care of the funeral home.

The family of Elaine Preston created this Life Tributes page to make it easy to share your memories.

Send flowers to the Preston family.