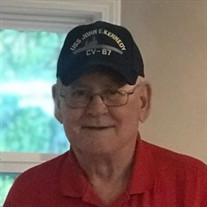 Edwin Wayne Lee, 71, of Pittsburg KS, passed away on July 28th, 2020. He had been in ill health for several months. He was born on June 6th, 1949 in Hereford, TX. He was the eldest son of E.W. & Mona Lee. Edwin attended schools in Girard, KS. He later transferred to Enid High School in Enid, OK where he graduated in May 1967. After high school graduation, Edwin went into military service. He was in the B 1st 177th Field Artillery. He was stationed in Vietnam for a year. He returned September 1970 and was awarded several medals: Air Medal, Army Commendation, Purple Heart, Bronze Star & Bronze Star with Oak Leaf Cluster. He continued in the Army until April of 1971 when he was honorably discharged. He was very proud to be a U.S. Veteran. He married Janice McCulloch on December 22, 1970. They later divorced. They had 3 sons, Larry, Randy and Jason. Edwin worked in telephone engineering most of his life. Most recently he was employed at Craw Kan Telephone in Girard, KS and worked there for 21 years. He was still employed there at the time of his death. He also collected lots of items throughout his life. One of his favorite items to collect was coins and he was known for always leaving a gold coin inside of the birthday cards that he gave to his kids and grandkids. He also enjoyed fishing, attending his grandchildren’s events and getting together to celebrate family birthdays. He loved his sons, daughter in-laws, and grandchildren dearly. He was preceded in death by his parents and a brother, Robert Lee, all of Enid, OK. He is survived by his son Larry (Tracy) Lee of Franklin, KS, Randy Lee of Frontenac, KS, Jason (Amanda) Lee of Pittsburg, KS. He is also survived by his brother Ronnie Lee of Amarillo, TX and David Lee of Enid, OK and his grandchildren Kelcey Estle (Matt), Brody, McKenzi, Hunter, Breckin & Amaris Lee. He is also survived by a great granddaughter, Paisley. Visitation will be Saturday, August 1st at Bath Naylor Funeral Home at 10 a.m. with the funeral following at 11 a.m. Condolences may be left at www.bathnaylor.com. The service will be live streamed on our website (bathnaylor.com) through Mr. Lee’s obituary page. In lieu of flowers, the family suggests donations to Harry Hines Hospice. Services are under the direction of the Bath-Naylor Funeral Home 522 S. Broadway, Pittsburg, KS 66762.

Edwin Wayne Lee, 71, of Pittsburg KS, passed away on July 28th, 2020. He had been in ill health for several months. He was born on June 6th, 1949 in Hereford, TX. He was the eldest son of E.W. & Mona Lee. Edwin attended schools in Girard, KS.... View Obituary & Service Information

The family of Edwin Wayne Lee created this Life Tributes page to make it easy to share your memories.

Send flowers to the Lee family.