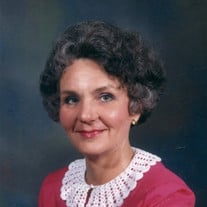 Dorothy Nell (Simmons) Fanoele, passed away at 12:10am Sunday, December 9, 2018 at the Medicalodge of Columbus, KS. She was born January 3, 1932, Paducah, Kentucky the daughter of Boyd Simmons and Ann (Rawlings) Simmons. Dorothy was a 1949 graduate of St. Mary’s Academy of Paducah, KY and later attended Paducah Junior College. She married James L. Fanoele, July 10, 1954, in Paducah, KY; he preceded her in death on January 21, 1989. She and her husband moved to Columbus, Kansas in 1960 and worked as paraprofessional in Columbus School System for 3 years from 1972 to 1975. In July of 1975 she became the Columbus City librarian, retiring in 1994. Dorothy taught extension art classes for Labette County Community Junior College for 10 years and was a member of Columbus Museum Board. Survivors include two sons: Mark (Robi) Fanoele of Columbus and Tom (Pam) Fanoele of Riverton, KS; two sisters: Doris Gresham and Rita Otey both of Paducah, KY; a brother: Arnold Simmons of Cape Girardeau, MO; along with 8 grandchildren, 12 great-grandchildren and 3 more on the way. She was preceded in death by her parents, husband, two sons: James B. Fanoele and Joseph K. Fanoele. Memorial services will be 10am, Wednesday December 12, 2018 at the Bath-Naylor Funeral Home with Pastor Jeff D. Martin officiating. Burial will take place at the Park Cemetery at a later date. Condolences may be left at www.bathnaylor.com. Memorials may be made to the Columbus Library and/or the Columbus Museum; these may be left at or mailed to the funeral home. Services by Bath-Naylor Funeral Home Columbus, KS.

Dorothy Nell (Simmons) Fanoele, passed away at 12:10am Sunday, December 9, 2018 at the Medicalodge of Columbus, KS. She was born January 3, 1932, Paducah, Kentucky the daughter of Boyd Simmons and Ann (Rawlings) Simmons. Dorothy was a 1949... View Obituary & Service Information

The family of Dorothy N. Fanoele created this Life Tributes page to make it easy to share your memories.

Send flowers to the Fanoele family.