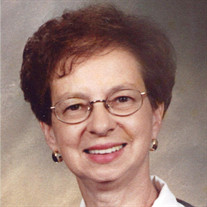 Doris Touchton, 77 of Pittsburg, KS died at 4:50pm Oct 11, 2017 at her home following a long illness. She was born September 9, 1940 in Lawrence, KS the daughter of George and Zena (Ziegler) Bartz. On April 20, 1963 she was united in marriage to Elijah E. Touchton in Eudora, KS, he survives her of the home. Doris received a bachelor’s degree in nursing from the University of Kansas at Lawrence. She was a Registered Nurse working at the VA in Wichita, Lawrence Memorial Hospital and the KI Sawyer AFB in Michigan. Doris helped her husband start Touchton Electric and continued to work there for 40+ years. She was a longtime member of the Trinity Baptist Church in Pittsburg, KS. Additional survivors include a son David (Susan) Touchton of Crestline, KS two daughters: Janet (Scott) Graham of Weir, KS and Joanne (Brad)Wieneke of Quapaw, OK; nine grandchildren: Haley Touchton, Justin Graham, Hope Touchton, Anna Wieneke, Jared Graham, Eli Touchton, Rachel Wieneke, Brooke Wieneke, and Joy Wieneke and a great-granddaughter Blakely Hinman. She was preceded in death by her parents, a brother LaVerne Guenther, and a sister Janice Colman. Funeral services will be 10 am, Tuesday October 17, 2017 at the Trinity Baptist Church in Pittsburg with Pastors Bryan Jones, Brad Wieneke and Jordan Hodges officiating. Burial will follow in the Highland Park Cemetery. Family will receive friends at the Bath-Naylor Funeral Home from 6-8 pm Monday evening. Condolences may be left at www.bathnaylor.com. Memorials may be made to the Trinity Baptist Church (non-budget Mission Projects). Services and arrangements are under the direction of the Bath-Naylor Funeral Home of Pittsburg, KS.

The family of Doris Touchton created this Life Tributes page to make it easy to share your memories.

Send flowers to the Touchton family.