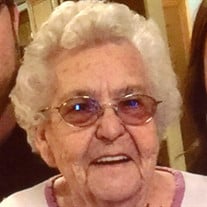 Donna Jeanne Froebe 93, of Columbus, KS died 7:10pm Tuesday August 1, 2017 at the Medicalodge Nursing Home in Columbus, KS following an illness. Donna was born February 29, 1924 in Chanute, KS the daughter of Windell A. and Dessie Isabell (White) Lamb. On May 5, 1943 Donna married Raymond Charles Froebe in Independence, KS; he preceded her in death on February 28, 1981. Donna worked most of her life as a homemaker but later worked in the kitchen fixing meals at Medicalodge in Columbus for the residence. Donna was a member of the First Baptist Church in Columbus, KS; was the President of Sharing and Caring Group; loved to do embroidery and cross stitching in her free time. Family was the most important thing in her life. Survivors include her children Carol Smith of Carrollton, TX, Ilene K. Myers and husband Don of Norfolk, NE, David E. Froebe and wife Karol of Parsons, KS and Randy W. Froebe and wife Debra of Columbus, KS; daughter-in-law Edith Look and husband Roger of Spencer, NE; grandchildren Lynnette Smith, Matthew Myers, Melissa Fehrs, Cory Froebe, Jacob Froebe, Nathan Froebe, Katrina Froebe, Paula Matheson, Amber Weber, Angela Look and Ryan Look; many great-grandchildren and 2 great-great grandchildren. Donna was preceded in death by her husband, parents, son Gary Keith Froebe, brothers Ardis Lamb and Donald Lamb and grandchildren Crystal Froebe and Tina Pinkerman. Funeral Services will be 10:00am Saturday August 5, 2017 at the Bath-Naylor Funeral Home in Columbus, KS with Pastor John Stone officiating. Burial will follow at the Liberty Cemetery in Liberty, KS. Family will receive friends from 7-8:00pm Friday August 4, 2017 at the Bath-Naylor Funeral Home in Columbus, KS; friends may call after 1:00pm Friday. In lieu of flowers the family asks expressions of sympathy to be in the form of memorials to the First Baptist Church in Columbus, KS. Friends may drop off or mail memorials to the Bath-Naylor Funeral Home 611 S. East Ave. Columbus, KS 66725. Condolences may be left at www.bathnaylor.com. Arrangements and services are under the direction of Bath-Naylor Funeral Home of Columbus, KS.

The family of Donna Jeanne Froebe created this Life Tributes page to make it easy to share your memories.

Send flowers to the Froebe family.