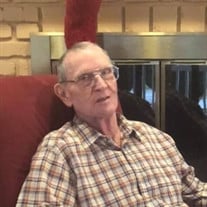 Donald Ray Morris, 84, of Opolis, Kansas, passed away Monday, January 21, 2019 at Arma Health and Rehab. Donald was born October 15, 1934 to Glenn H. and Bessie Pauline (Wilson) Morris in Pittsburg, Kansas. He was a graduate from Frontenac High School, class of 1953. Donald served in the United States Army for 2 years and retired from the United States Navy after 18 years of service. He worked as a PTF clerk and carrier for the Columbus Post Office for 5 years and 9 years as a Postmaster in Treece, Kansas and Haven, Kansas. He was also a Carevan driver for Mt. Carmel for 9 years. Donald married the love of his life Rose Gagnon, on February 24, 1956, she resides at the home. He was a member of the Opolis Methodist Church and the American Legion. Donald enjoyed golfing, bowling and traveling with his wife Rose to various square dancing events in the area for almost 10 years. He is survived by his wife, 3 sons; Steve (Carol) Morris of Girard, KS, Jack (Kathy) Morris of Bloomington, IL, Curtis (Laura Griffen) Morris of Elkland, MO, an Aunt; Betty Bojeck, 12 grandchildren, 19 great-grandchildren, and several cousins, nieces and nephews. Donald was preceded in death by his parents, 2 brothers; Glenn Morris, Melvin Morris, 2 sisters; Kay VanHorn and Lois Frye. Funeral services will be held at 6 PM, Wednesday, January 23, 2019 at the Bath-Naylor Funeral Home in Pittsburg, KS. Visitation will be held prior to the service at 5 PM at Bath-Naylor. A private burial will be held at the Fort Scott National Cemetery. In lieu of flowers, the family suggests memorials to be sent to the Alzheimer's Association and the S.E.K Humane Society. Condolences may be left at www.bathnaylor.com. Arrangements are under the direction of the Bath-Naylor Funeral Home of Pittsburg, KS.

Donald Ray Morris, 84, of Opolis, Kansas, passed away Monday, January 21, 2019 at Arma Health and Rehab. Donald was born October 15, 1934 to Glenn H. and Bessie Pauline (Wilson) Morris in Pittsburg, Kansas. He was a graduate from Frontenac... View Obituary & Service Information

The family of Donald Ray Morris created this Life Tributes page to make it easy to share your memories.

Send flowers to the Morris family.