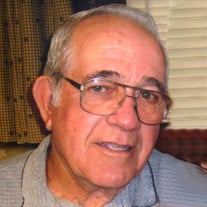 Donald L. Garritson 78, of Pittsburg, KS died 6:21pm Thursday May 23, 2019 at his home following an illness. Donald was born August 11, 1940 in Farlington, KS the son of Edward George and Mary Edith (Farrell) Garritson. He lived in rural Weir, KS most all of his life attending area Scammon Grade Schools and later graduated from Columbus High School. On April 16, 1960 Donald married Joyce M. Jameson in Pittsburg, KS; she survives at the home. Don worked for Oldham’s Dairy for 20 years as a machine operator and later for Grimaldi’s Cash Grain as Plant Manager for 20 years. Donald attended Countryside Christian Church in Pittsburg, KS. He enjoyed hunting, fishing and spending time in the outdoors. He loved his time with Joyce on the back deck taking in many sunsets watching wildlife behind his house. Big, strong and gentle are all words to describe the man Don was to many. He will be greatly missed by his wife, children, grandchildren and all who knew him. Survivors include his children Mark Garritson and wife Melanie of San Clemente, CA and Mary Ann York and husband Brent of rural Galena, KS; grandchildren Molly Garritson, Matt Garritson, Walt York(wife Heather), Will York and Wayne York. Donald was preceded in death by his parents, brother Ed Garritson and a sister Donna Craig. Memorial Services will be 10:00am Saturday June 1, 2019 at the Bath-Naylor Funeral Home in Pittsburg, KS with Pastor Ben Scott officiating. Family will receive friends from 9-10am prior to services. Burial will be private at Hosey Hill Cemetery in Weir, KS. In lieu of flowers the family asks expressions of sympathy to be in the form of memorials to the Lord’s Diner of Pittsburg. Friends may drop off or mail memorials to Bath-Naylor Funeral Home 522 S. Broadway Pittsburg, KS 66762. Condolences may be left at www.bathnaylor.com. Arrangements and services are under the direction of Bath-Naylor Funeral Home of Pittsburg, KS.

The family of Donald L. Garritson created this Life Tributes page to make it easy to share your memories.

Send flowers to the Garritson family.