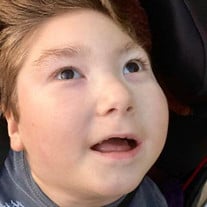 Dominic Louis Foster, age 8, died on Thursday, March 3, 2022, at Ascension Via Christi in Pittsburg, KS. He was born on August 29, 2013, in Joplin, MO, to parents Richard B. and Nicole L. (Guerrero) Foster. He was a 3rd grade student at Meadowlark Elementary and enjoyed spending time with his classmates through his daily Zoom calls. Dominic was a very adventurous young man. He loved the outdoors, swimming, bowling, visiting the ocean, and spending time with family. One of the many things Dominic loved was traveling to various aquariums with his parents. He traveled to Tulsa, Denver, Kansas City, and Houston, just to name a few. One of his favorite aquariums was the Wonders of Wildlife in Springfield, MO. He loved it so much he had a membership, so he could visit anytime he wanted. Dominic is survived by his parents, Richard and Nicole Foster; paternal grandparents Henry Krantz and Kerry Kubler of Chicopee, KS, Patricia and Tom Glick of Pittsburg, KS; aunts and uncles Christopher Guerrero and wife, Stephanie, and their two children, Jeremiah and Myles, of Castle Rock, CO, Matthew Guerrero and Courtney Cole of Wichita, KS, Matthew Krantz and wife, Tera, and their two children, Alivia Krantz and Chloe Riska of Pittsburg, KS; several great aunts and uncles in Chicopee and Pittsburg, and the Foster and West families from Kansas. He is preceded in death by his paternal grandparent Richard Foster; maternal grandparents David and Beverly Guerrero; paternal great-grandparents Louis and Carol Passeri, Henry and Mary Krantz, and Lena Foster; maternal great-grandparents Reuben and Inez Johnson, Martin and Refugio Guerrero. Family will receive friends from 3:30pm – 6:30 pm, Wednesday, March 9, 2022 at Bath-Naylor Funeral Home in Pittsburg, KS. A private graveside service will take place at Garden of Memories Cemetery on Thursday, March 10, 2022. Memorials may be made to the Ronald McDonald House in KC; these may be dropped off or mailed to the Bath-Naylor Funeral Home, 522 S. Broadway Pittsburg, KS 66762.

Dominic Louis Foster, age 8, died on Thursday, March 3, 2022, at Ascension Via Christi in Pittsburg, KS. He was born on August 29, 2013, in Joplin, MO, to parents Richard B. and Nicole L. (Guerrero) Foster. He was a 3rd grade student at Meadowlark... View Obituary & Service Information

The family of Dominic Louis Foster created this Life Tributes page to make it easy to share your memories.

Send flowers to the Foster family.