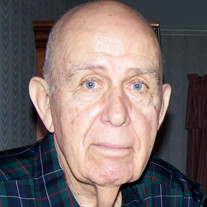 Domenic Richard (Dick) Fogliasso, a lifelong resident of Frontenac, passed away on March 24, 2019, at Via Christi Village in Pittsburg, KS. He was 89 years old. Dick was born on June 8, 1929, to Domenic Stephen and Charlotte Dominican (Cavallo) Fogliasso, as an only child. He graduated from Frontenac High School in 1947 and married Modestyne Marie Cornella on June 16, 1951. Modestyne passed away on January 7, 2016. Married for 65 years, Dick and Modestyne raised four children. After serving in the U.S. Army, he returned to his childhood home. He worked for the Kansas City Southern Railroad for 10 years, then for the Gas Service Company until his retirement in July, 1991. Afterwards, he continued to work at Watco Companies until March 2017. Dick was a lifelong member of the Sacred Heart Church in Frontenac. He was a member of the Frontenac American Legion, the Knights of Columbus, and served on various boards including the Southeast Kansas Area of the Aging, Frontenac Senior Citizens Board, and the Frontenac Housing Authority Board. He was an avid gardener, a collector of tools, and was often seen at Frontenac and Pitt State football games. Dick was blessed with a large and loving family. He is survived by four children: Dick (Chris) Fogliasso, of Frontenac; Steve (Terry) Fogliasso, of Overland Park; Lynne Ann (Calvin) Merando, of Frontenac; and Mary (Jim) Marrello, of Lenexa. Also surviving are seven grandchildren: Maria (Stephen) Huggins, of Olathe; Fr. John Fogliasso, of Wichita; Tracy Fogliasso, of Spring Hill, Ashley (Matt) Roberts, of Lenexa; Katie (Steven) Falk, of Pittsburg; Eric Marrello, of Prairie Village; and Adam (Briana) Marrello, of Olathe. Dick also leaves behind seven great-grandchildren: Jack and Chloe Huggins of Olathe, Cal Roberts of Lenexa, Elizabeth and Caroline Falk, of Pittsburg, and Owen and Lucia Marrello, of Olathe. Mass of Christian Burial will be 10:00am Wednesday March 27, 2019 at the Sacred Heart Catholic Church with Fr. John Fogliasso and Fr. P.J. Voegeli as concelebrants. Burial will follow at the Frontenac City Cemetery. Family will receive friends from 9-10:00am prior to service at the church. In lieu of flowers the family asks expressions of sympathy to be in the form of memorials to the Frontenac Senior Citizens Center. Friends may drop off or mail memorials to the Friskel Funeral Home 230 E. McKay Frontenac, KS 66763. Condolences may be left at www.friskelfuneralhome.com. Arrangements and services are under the direction of Friskel Funeral Home of Frontenac, KS.

Domenic Richard (Dick) Fogliasso, a lifelong resident of Frontenac, passed away on March 24, 2019, at Via Christi Village in Pittsburg, KS. He was 89 years old. Dick was born on June 8, 1929, to Domenic Stephen and Charlotte Dominican (Cavallo)... View Obituary & Service Information

The family of Domenic Richard (Dick) Fogliasso created this Life Tributes page to make it easy to share your memories.