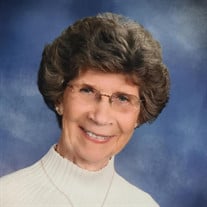 Dolores Marie Kern McCurdy, passed away at her daughter and son-in-law’s home, in Pittsburg, on January 2, 2021 at the age of 85. She was preceded in death by her parents, Dutch and Grace Kern, her brother, Junior Kern, and her husband of 57 years, Jasper Marvin McCurdy. Born at home during a winter storm on January 30, 1935, Dolores was delivered by her father in Leavenworth, Kansas. Dolores, or “Dee,” was a happy, active soul from childhood until her death. Music was a staple of Dee’s family life, and Dee was especially talented at playing the piano and alto saxophone. As a youngster, she played piano in her father’s dance band (Dutch Kern’s Orchestra) at the Kern Barn Dance Hall every weekend. The band also played at dances throughout northeastern Kansas during that time. At the age of 80, Dee taught herself to play the ukulele and joined the Tallgrass Ukulele group that performed for community gatherings. Dolores grew up with horses and was an active member of the Leavenworth Saddle Club. She joined her parents as they rode in parades and horse shows and she earned over a hundred ribbons and awards in competitions. Dolores attended Saint Joseph Elementary School in Leavenworth and graduated from Leavenworth High School. In high school, she was active in the band and other clubs, including the high school’s Business Club. She was nominated as President of the Kansas State High School Business Organization. This led to her post-high employment at Fort Leavenworth Post Exchange where she met the love of her life, Marvin McCurdy. Dee and Marv were married in Leavenworth on April 16, 1955 and Dee began the life of an Army officer’s wife. Dolores enjoyed being active. For years, she walked 6-8 miles every day, and she was an avid bowler who earned many individual and team awards. Dee also worked at the bowling alley, serving as a youth coach, as league president and secretary for many years, and as the president of the Leavenworth Women’s Bowling Association. Dee and Marv were terrific square dancers and attended dances across northeast Kansas. Dee was also a member and officer of the Leavenworth Philomathean Literary Club. Dolores was an outstanding cook and had a world-class cookbook library that she had assembled over the years. While she loved to read literature, she especially loved to read recipes and would spend hours upon hours reading and planning menus. She prepared and published a cookbook and was the Food Editor for the Leavenworth Times for several years writing weekly columns. Dolores and Marvin were committed to service and giving to others. Dee was a life-long member of the St Joseph parish in Leavenworth and coordinated annual charity efforts to raise money for the church and to provide supplies, clothing, and gifts for needy children and families. Dolores loved her doggies, especially Liebchen, a Yorkie that was a superb companion for her, but Dolores’ primary gift was her love of her family and friends. She was devoted to her husband of 57 years, Jasper Marvin McCurdy, Jr. who preceded her in death (2013). She was also very, very proud of her children, grandchildren, and great-grandchildren and would tell anyone who would listen all about them. Survivors include son Ronald McCurdy (Kimberly Chaney) of Frederick, Maryland, and daughter Rhonda Grace McCurdy White (Tony) of Pittsburg, Kansas, grandchildren Caitlin McCurdy (Sam Garland), Devon McCurdy Lawrence (Robert), Kelsey McCurdy, Adam White, Heather Turner (Bryan), Lara Hamidi-Ismert (Mitch), Jonathan Harms Mahlandt (Rachael), Grant Chaney, Kate Chaney, and great-grandchildren Elliott Jasper Garland, Finn Harms Mahlandt, Darcy Harms Mahlandt, Bryson Turner, Cobyn Turner, her very special friend Myron Sildon, a sister-in-law Mary Charlotte Kern, and many nieces and nephews. Services will be held at a later date. Condolences can be left to our web site www.bathnaylor.com In lieu of flowers, the family suggests donations to one’s local animal shelter or humane society. Arrangements are by the Bath-Naylor Funeral Home, 522 S. Broadway in Pittsburg, KS 66762.

Dolores Marie Kern McCurdy, passed away at her daughter and son-in-law&#8217;s home, in Pittsburg, on January 2, 2021 at the age of 85. She was preceded in death by her parents, Dutch and Grace Kern, her brother, Junior Kern, and her husband... View Obituary & Service Information

The family of Dolores Marie McCurdy created this Life Tributes page to make it easy to share your memories.

Dolores Marie Kern McCurdy, passed away at her daughter and son-in-law’s...

Send flowers to the McCurdy family.