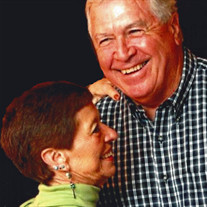 Dixie A. Keener, age 79 of Linn, MO, passed away Monday, January 1, 2018, at Capital Region Medical Center in Jefferson City. Ralph H. Keener, age 80 of Linn, MO, passed away Tuesday, January 2, 2018, at Capital Region Medical Center in Jefferson City. Dixie was born July 23, 1938, in Roseland, KS, a daughter to the late George and Evelyn (McDaniel) Blundell. Ralph was born May 20, 1937, in Scammon, KS, a son to the late Ralph and Marjorie (Johnson) Keener. Dixie was a 1956 Graduate of West Mineral High School and Ralph was a 1955 graduate of Cherokee County High School. Ralph also served in the Naval Reserve. On June 4, 1960, Ralph and Dixie were united in marriage in Scammon, KS. Dixie was a homemaker and later retired from the Missouri State Tax Commission. Ralph was an instructor in Design Drafting at Linn State Technical College now known as State Technical College of Missouri in Linn for 33 years before his retirement in 2003. Dixie was a member of the Community of Christ Church where she served as an Elder. She was a lifetime member of the Eastern Star and a proud Native American as a member of the Cherokee Nation. Ralph was a member of the Presbyterian faith and a Past Grand Master of the Masonic Lodge. Dixie enjoyed bowling, ceramics, making Native American jewelry, pow wows, singing, playing piano, reading and baking. Ralph was a sports lover. He enjoyed attending high school basketball games. He was a story teller, a shade tree mechanic, he enjoyed being a teacher and furthering the knowledge of his students. He was known as “Mr. Fixit” for being able to repair almost anything. He was a published song writer and enjoyed gardening. Ralph and Dixie had mutual interests, including: dancing, traveling, camping, the St. Louis Cardinals, and were both members of the George Strait Fan Club. Their greatest love, however, was the time spent with their family and friends. Ralph and Dixie are survived by: one son, Stephen Keener of Lenexa, KS; three daughters, Sherri Paschal and her husband Jim of Linn, Susan Keener of Springfield and Stacy Keener of Springfield; granddaughter, Jordan Ann Deeken and her husband Bradley of Linn and two great grandchildren, Gatlin and Gentry Deeken. Dixie is also survived by: two brothers, George Blundell of Joplin and Jim Lee and his wife Anitra of Mulvane, KS. Ralph is also survived by a sister, Coleen Grant of Scammon, KS Visitation for Ralph and Dixie will be from 11:00 a.m. until 1:00 p.m. on Sunday, January 7, 2018, at Morton Chapel in Linn, MO An additional visitation will be from 10:00 a.m. until 11:00 a.m. on Monday, January 8, 2018, at the Bath-Naylor Funeral Home and Crematory in Weir, KS. Funeral Services will follow at 11:00 a.m. in the funeral home chapel. Interment for Ralph and Dixie will be in the Hosey Hill Cemetery near Weir with Military Honors for Ralph. Condolences may be left at www.bathnaylor.com Expression of sympathy may be made to the Wounded Warriors Project or to State Technical College of Missouri; these may be left at or mailed to the funeral home. Arrangements are under the direction of Morton Chapel, Linn, MO(www. mortonchapel.com). Local arrangements are under the direction of the Bath-Naylor Funeral Home of Weir, KS

The family of Dixie & Ralph Keener created this Life Tributes page to make it easy to share your memories.

Send flowers to the Keener family.