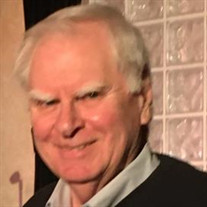 Obituary for Dennis A. Gilmore It is with profound sadness that we announce the unexpected death of Dennis Anthony Gilmore. He was born on April 5, 1946 to Leo S. and Maxine Gilmore in Pittsburg, KS and died on January 26, 2021 at his home in Indio, CA at the age of 74. Dennis attended St. Mary’s Colgan Catholic Schools through high school; he also served as an altar boy for Our Lady of Lourdes Catholic Church in Pittsburg. While earning his bachelor’s degree at Pittsburgh State University (Class of 1969) he joined the Zeta Iota Chapter of Sigma Chi fraternity, which fostered his ideals of friendship, justice and learning while establishing lifelong bonds with a network of brothers. He enjoyed a successful career in non-profit management advancing through the ranks of the March of Dimes Birth Defects Foundation, which contributed to his being named a Pittsburg State University Outstanding Alumni in 1982. Dennis found his passion for live theatre as a volunteer producer for Pegasus Players, a professional theatre company in Chicago. After moving to Athens, TX and establishing himself as an active community member, he created the position of Executive Director for the Athens Little Theatre. During his tenure from 1989 through his retirement in 2014 he worked tirelessly to grow the theatre into the Henderson County Performing Arts Center where he directed over 250 plays with adult casts and more than 300 children’s productions. Dennis completed a Master’s degree in theatrical directing (1995), taught speech and technical theatre at the Trinity Valley Community College in Athens, and was an active member and leader of the local Rotary Club (President, 2006). Dennis was gifted with tremendous energy, work ethic, generosity of spirit and natural leadership ability. He promoted live community theatre across Texas and the nation. Dennis was active with Texas Non-Profit Theatres, holding various board positions; he initiated its first state youth conference in 1996 and subsequently chaired the first ten years of that event. In 2009 he was instrumental in establishing the TNT POPS! New Play Project to promote new playwrights. On the national level, Dennis served the American Association of Community Theatres on myriad committees including four years as Vice President of Education, seven terms as California State Contact/Region VII Rep and the organization’s national resource director. He was sought as an adjudicator and festival Commissioner for AACT- sponsored theatre festival competitions across the country. Dennis received both local and national awards for his commitment to theatre, culminating in joining the ranks of the AACT Fellows in 2011. He was recognized by AACT earlier this year as the recipient of the Art Cole Lifetime of Leadership Award. His community impact was also noted with the proclamation designating Saturday August 14, 2021 as Dennis Gilmore Day in Athens, TX. To honor his influence on their lives, nearly four dozen actors from across the country were able to return to their home stage in Athens to perform favorite musical numbers and skits to celebrate his influence and legacy as teacher, mentor, friend, role-model and sometimes, second Dad. Dennis was known as someone who was a reliable resource and an excellent listener with a knack for helping others thrive. He was fun-loving, often using his wicked sense of humor and playfulness to make people laugh. His was a life well-lived. Dennis is survived by his beloved wife and life partner of forty years, Karen, of Indio, CA; his dear son Christopher, daughter-in-law Jennifer, and grandchildren Mason, Channing and Brandt of Allen, TX; brothers Ronald of Dodge City, KS, Leo Alan of Montgomery, TX and Richard (Gail) of Toronto, Ontario, Canada. Other surviving family members include niece Samantha, nephews Joshua, Ryan and Andrew, numerous cousins and extended family members along with scores of friends. Visitation will be held at Bath-Naylor Funeral Home on October 1, 2021 at 7:00 p.m. A memorial mass is scheduled at 10:00 a.m. Saturday, October 2, 2021 at Our Lady of Lourdes Catholic Church in Pittsburg, KS with Bishop Emeritus Ronald Gilmore, as celebrant, followed by an inurnment service at the Garden of Memories Cemetery, Pittsburg. The organist will be Kathleen Brown-Cecora and the vocalist will be Judi Fast. A graveside ceremony will be conducted by the Sigma Chi Fraternity. In lieu of flowers the family requests memorial donations to the Zeta Iota Chapter Capital Fund for the Sigma Chi house renovation on Pittsburg State University campus. Access https://tinyurl.com/zeta-iota for details.

Obituary for Dennis A. Gilmore It is with profound sadness that we announce the unexpected death of Dennis Anthony Gilmore. He was born on April 5, 1946 to Leo S. and Maxine Gilmore in Pittsburg, KS and died on January 26, 2021 at his home... View Obituary & Service Information

The family of Dennis A. Gilmore created this Life Tributes page to make it easy to share your memories.

Obituary for Dennis A. Gilmore
It is with profound sadness that...

Send flowers to the Gilmore family.