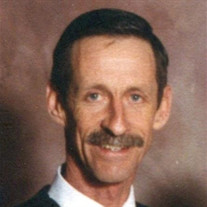 Dennis R. Gaston 71, of Pittsburg, KS died 4:21am Wednesday August 7, 2019 at his home following a long illness. Dennis was born April 9, 1948 in Pittsburg, KS the son of Galen and Doris (Bower) Gaston. He was a lifelong resident of the area and a graduate of Columbus High School. Dennis served our country in the United States Airforce during Vietnam from 1967-1975. On December 9, 1974 Dennis married Marjorie F. Larson in Carson City, Nevada; they later divorced. Marjorie preceded him in death on March 17, 2011. Dennis worked as a truck driver, businesses including Stockade, Pitt Plastics and most recently Coosemans Farms. Dennis was of the Christian Faith; he was a Shriner, a member of the West Mineral Eagles and a member of the American Legion Post #35 Cherokee. Survivors include his mother Doris Gaston of Pittsburg, KS, partner of 8 years Florine Stultz of Pittsburg, KS; daughters Penny Murdock and husband Todd of Joplin, MO, Renae D. Jessip of Frontenac, KS, Kelly R. Martin and husband Jim of Washington state, Amy Huber and husband Stephen of Leawood, KS, step-children Todd Leabo and fiancée Tammy of Pittsburg, KS, Denise Darnaby and husband Bill of Arma, KS, Don Leabo and wife Lorena of Frontenac, KS; sister Lorna Alford and husband Gary of Galena, KS; close cousins Dana Davidson and LeRoy Davidson; close friend Barbie Adamson; 15 grandchildren and 8 great-grandchildren. Dennis was preceded in death by his father. Funeral Services will be 11:00am Monday August 12, 2019 at the Bath-Naylor Funeral Home in Pittsburg, KS with Pastor Aaron Williams officiating. Burial will follow at the Crocker Cemetery in Pittsburg, KS. Family will receive friends from 10-11:00am prior to the service at the funeral home. In lieu of flowers the family asks expressions of sympathy to be in the form of memorials to the Via Christi Cancer Center. Friends may drop off or mail memorials to Bath-Naylor Funeral Home 522 S. Broadway Pittsburg, KS 66762. Condolences may be left at www.bathnaylor.com.

Dennis R. Gaston 71, of Pittsburg, KS died 4:21am Wednesday August 7, 2019 at his home following a long illness. Dennis was born April 9, 1948 in Pittsburg, KS the son of Galen and Doris (Bower) Gaston. He was a lifelong resident of the area... View Obituary & Service Information

The family of Dennis R. Gaston created this Life Tributes page to make it easy to share your memories.

Send flowers to the Gaston family.