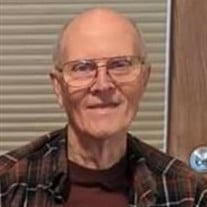 Dennis C. Decker, 82, of Weir, KS passed into God’s grace on February 10, 2022. He was born January 21, 1940 in Roscoe, SD the son of Raymond and Vera Decker. He lived in South Dakota most of his life. Dennis attended Aberdeen High School and graduated from Sioux Falls College. He married Joanne Marlene Haner on June 4, 1961, in Sioux Falls SD. Dennis was the proud patriarch of two sons, one daughter, nine grandchildren and thirteen great-grandchildren. Mr. Decker was a high school English, Speech, Theater and Debate teacher for 18 years. He served as Mayor for the City of Huron, SD from 1975-1979. Dennis also ran his own drywall business (for 30 years) and managed the Huron Municipal Pool for many years. He then changed careers and went into clinic and medical management/administration for 27 years in various locations in South Dakota and Minnesota. He was a member of many professional associations over the course of his life. Dennis and Joanne settled back in Rapid City, SD in 2001 where he retired in 2007. Dennis was very active in his community, as he joined the Chapel Valley Homeowner’s Board and managed the Chapel Valley pool until 2014. Mr. Decker was a member of the Rapid City First Baptist Church. Family was his first priority, and he spent countless hours with his children, grandchildren and great-grandchildren attending school and sporting events and watching them grow. He was a musician at heart, and loved music. He sang and played guitar. Dennis also loved the outdoors, golf, car rides in the Black Hills, watching old westerns, and was an avid reader (Louis L’Amour was his favorite!). Survivors include the love of his life Joanne of Weir, KS; two sisters, Glenda Meister of Faulkton, SD and Ellen Clausen-Decker of Sioux Falls, SD; and one brother Jim Decker in New York. Also surviving are two sons Randy Decker and wife Colette of Rapid City, SD; Mike Decker of Winslow, AZ; and one daughter Amy Zortz and husband Bryan of Weir, KS. Surviving grandchildren include Stephanie Decker, Nick Decker, Clint Walker, Michael Decker, Paul Decker, Austin Rogers, Skylar Zortz, Sydney Wilson and Jake Zortz. He was preceded in death by his parents. A memorial service will be held at 6:00pm on Tuesday, February 22, 2022 at Bath-Naylor Funeral Home in Pittsburg KS. The family will receive friends for visitation prior to the memorial service at 5:00pm. The service will be live streamed and available to view below on this webpage. In lieu of flowers, the family requests that donations be made to the Southeast Kansas Humane Society in Pittsburg, KS or Shriner’s Hospitals.

Dennis C. Decker, 82, of Weir, KS passed into God&#8217;s grace on February 10, 2022. He was born January 21, 1940 in Roscoe, SD the son of Raymond and Vera Decker. He lived in South Dakota most of his life. Dennis attended Aberdeen High School... View Obituary & Service Information

The family of Dennis C. Decker created this Life Tributes page to make it easy to share your memories.

Send flowers to the Decker family.