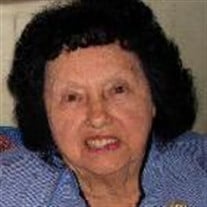 Dee “Delores” Montgomery, 87 of Pittsburg went to be with the Lord at 4:20 p.m. Saturday April 9, 2016 at the Via Christi Village Nursing Facility in Pittsburg, KS. She was born December 3, 1928 in Pittsburg, KS the daughter of Fred and Della (Ellis) Ross. She was a lifetime resident of the Pittsburg area. Dee attended Pittsburg schools, was a graduate of Pittsburg High School, she received her BS in Education from Kansas State Teachers College (PSU) graduating in 1951. She married Dean Montgomery on July 1, 1951 in Pittsburg, KS; he preceded her in death on December 7, 2008. Dee taught kindergarten for two years in the Olathe School System. She was a homemaker for Dean and her four boys and helped manage apartments and single family rental homes that the couple owned. Dee was a lifelong and very active member of the First Christian Church in Pittsburg serving as an elder and deacon. Additionally she and her husband Dean had bible study groups in their home for over 20 years, she was a member and past president of the local Church Women United, Christian Women’s Club and she belonged to the Red Hat’s Ladies Club. Dee was a Den Mother for her sons Boy Scout Troops. Dee loved to travel and was blessed to travel to Hawaii, Alaska, Europe and the Caribbean, including several cruises. She also enjoyed spending time with family at their place on Grand Lake. Survivors include two sons Michael Montgomery and wife Darlene, Mitchel Montgomery and wife Marisa all of Pittsburg; 5 Grandchildren Jordan, Logan and wife Chelsea Rae, Chelsea, Megan and husband Tyler, and Colton. She was preceded in death by her parents, husband Dean, two sons Randy and Mark and her sister Donna (Ross) Fuller. Funeral services will be 10 a.m. Thursday April 14th, 2016 at the First Christian Church in Pittsburg with Reverend Pat Nixon officiating. Burial will follow in the Highland Park Cemetery. The family will receive friends from 6-8 p.m. Wednesday at the First Christian Church. Friends may call at the funeral home after 3 p.m. Wednesday. Condolences can be sent to www.bathnaylor.com Memorial contributions can be made to the First Christian Church. Memorials may be brought by or mailed to the Bath-Naylor Funeral Home 522 S. Broadway Pittsburg, KS 66762.

The family of Dee "Delores" Montgomery created this Life Tributes page to make it easy to share your memories.

Dee “Delores” Montgomery, 87 of Pittsburg went to be with the...

Send flowers to the Montgomery family.