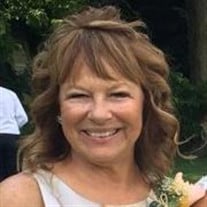 Debra Kay (Rink) Keller was born on February 16, 1953 in Pittsburg, Kansas to Bill M. Rink and Edna M. (Allred) Rink. She attended Pittsburg Public Schools and graduated from Pittsburg State University. She later earned a Master’s Degree in Elementary Education. In 1972, she was united in marriage with Bob Keller. She and Bob lived in several places while he was employed by McNally Pittsburg including Broken Arrow, Oklahoma where they made several life-long friends. In the mid-1980s, Bob and Debbie returned to their hometown allowing Debbie the pleasure of teaching fourth grade at St. Mary’s Elementary. Debbie and Bob had three children, Jeramy, Lindsey, and Joe. In 1993, Debbie made her final move to Branson, Missouri. She spent nearly 20 years as an Assistant Professor at College of the Ozarks in Point Lookout, Missouri. While at C of O, she was also Assistant Director of the Child Development Center where she graced many children with her kind-heart, loving spirit, and great generosity. For the past seven years, she served on the school board for Branson Public Schools. Debbie was creative, loved to crochet, make crafts, and decorate her home for every holiday. She and Bob attended many sporting events watching their children and grandchildren compete. She could often be found with her friends and family on Table Rock Lake relaxing, tubing, and just spending time together. Debbie made friends everywhere she went, always offering a smile and kind words. Debbie passed away on December 19, 2017 in Kansas City, Missouri. She was preceded in death by her daughter Lindsey, her parents, mother and father-in-law, and niece, Marny. She is survived by her husband, their sons Jeramy Keller of Pittsburg, Kansas; Joe Keller (destination unknown); three grandsons, Lake, Kannon, and Gus; three brothers, Billy Rink, Terry Rink, and Dennis Rink; one sister, Jeannine Standlee; and many nieces, nephews, great-nieces and great-nephews. Memorial Mass of Christian Burial will be held at Our Lady of the Lourdes in Pittsburg, Kansas on December 27, 2017 at 11 a.m. Condolences may be left at www.bathnaylor.com. In lieu of flowers, donations can be made to the SMC Annual Appeal. A private family burial will be held in Branson, Missouri at a later date.

The family of Debra "Debbie" Kay Keller created this Life Tributes page to make it easy to share your memories.

Send flowers to the Keller family.