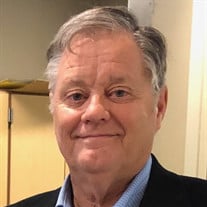 David Lloyd Peterson, 71, died March 11, 2021, at his home. He was born in Lamar, MO, on April 25, 1949, to Wayne and Louise Taylor Peterson. He lived on the family farm in Barton County. He attended grade school in Barton County rural schools and graduated from Liberal High School in 1967. He served two years in the U.S. Army. He spent one year in Vietnam as Staff Sergeant in the Americal Infantry Division. After being discharged in 1971, he started working at Beck & Hill as a meat cutter. In 1982, he purchased the meat market and sold it in 2004. During that time, he purchased 12 rental properties. On June 19, 1992, he married Beverly Engle. She survives at the home. Additional survivors include children: Gina Williams, Kansas City, Jared Peterson (wife AnnDee Peterson), Pittsburg, Jennifer Huff (husband Dr. C.J. Huff), Joplin, MO, and David Longan (and wife Haley Longan), Pittsburg. He had eight grandchildren, Mariah Williams and Madison Williams, Savannah, Keaton and Julianne Huff, Lily and Jack Peterson, and Brenlee Longan. He is also survived by brothers John Peterson and Paul Peterson, two uncles Bill Taylor (Kate Taylor), Bob Peterson (Dixie Peterson) of Nashville, MO, mother-in-law Margaret Engle, a Sister in law Barbara Todd and husband Loren, two nieces and one nephew. Dave also leaves behind his side kick “Pete Peterson”- whom he called the “best dog in America”. He was preceded in death by his parents and one brother, Steve Peterson. Since retirement, he attended all of his grandchildren’s functions, enjoyed going to the beach in Destin, Florida in the summer, and caring for his youngest grandchildren before they started school were the highlights of his life. He was so proud of all of his grandchildren. He enjoyed playing pitch and spades with his friends. Last summer he enjoyed going to his farm and checking on the wind turbines. He took different friends out to see what progress had been made. He wrote all of the kids and grand kids names on a turbine blade. He was always proud of his military service and was a faithful blood donor to the Red Cross, where he donated a total of 19 gallons over the years. Graveside services will be 11am Monday, March 15, 2021 at the Highland Park Cemetery with Dan Muter officiating. The family will greet friends at the cemetery from 10:30 am until service time. Memorials may be made to the Honor Flight Network and/or the American Red Cross; these may be left at or mailed to the funeral home. Pallbearers include: John Peterson, Paul Peterson, Jared Peterson, David Longan, C.J. Huff, Keaton Huff, and Matt LeFever. Honorary pallbearers include: Rick James, Josh James, Mike Fast, Bob Fast, Ross Talbott, Mark Bolton, Earl Lipscomb, Mark Peterson, Christopher Peterson, Larry Pommier, John Farrell, Dennis Cashero, Mike Forsythe, Jerry Rhodes, Stan Davidson, Steve Thompson, Larry Van Becelaere, Loren Todd, and Joe Meadows.

David Lloyd Peterson, 71, died March 11, 2021, at his home. He was born in Lamar, MO, on April 25, 1949, to Wayne and Louise Taylor Peterson. He lived on the family farm in Barton County. He attended grade school in Barton County rural schools... View Obituary & Service Information

The family of David Lloyd Peterson created this Life Tributes page to make it easy to share your memories.

Send flowers to the Peterson family.