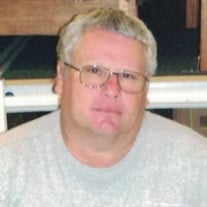 David Allen Million, 62, of Pittsburg, Kansas, died at his home suddenly on November 2, 2020 at his home. He was born August 14, 1958, the son of Alfred and Virginia (Bennett) Million. Dave spent all of his life in the Pittsburg area and was a graduate of Pittsburg high, class of 1976. On October 5, 1979 Dave married Diane Norris in Miami, OK, she preceded him in death on August 3, 2014. Dave was a maintenance technician for Leisure Time Products formally Poli-Tron where he worked for over 30 years. He will be most remembered for the love he shared with his two children. Dave attended many competitions for his daughter, twirling trips to nationals at Notre Dame University, Disney performances and cruises twice with Beth's Batoners. He was always the guide, photographer, Walmart finder extraordinaire, all around fix it dad for all the girls. All the twirlers called him “daddy dave”. Dave enjoyed hunting, fishing, softball and bowling. He had a constant battle with the falling leaves in his yard but enjoyed mowing and the yard work that it took to get rid of them. Survivors include of son; Kyle Million of Pittsburg, KS, daughter; Lacey Million, two brothers; Ron Million and his wife Lynn of Pittsburg, KS, Mark Million and wife Mary of Earlham, IA, sister; Sharon Million of Joplin, MO, two grandchildren; Leia Tiffany Million, Danika Million, two nieces; Stephanie Million, Stacy Han and husband Jason, dog; Milo and grand-dog; Oliver. Dave is preceded in death by his wife, parents and nephew Ryan Million. In lieu of flowers the family ask expressions of sympathy to be in the form of memorials to the National Multiple Sclerosis Society. Friends may drop off or mail memorials to the Bath-Naylor Funeral Home 522 S. Broadway Pittsburg, KS 66762. Email condolences may be left at www.bathnaylor.com. Arrangements are by the Bath-Naylor Funeral Home of Pittsburg, KS.

David Allen Million, 62, of Pittsburg, Kansas, died at his home suddenly on November 2, 2020 at his home. He was born August 14, 1958, the son of Alfred and Virginia (Bennett) Million. Dave spent all of his life in the Pittsburg area and was... View Obituary & Service Information

The family of David Allen Million created this Life Tributes page to make it easy to share your memories.

David Allen Million, 62, of Pittsburg, Kansas, died at his home...

Send flowers to the Million family.