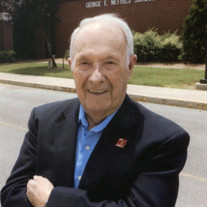 David L. Huffman, age 90, of Joplin, MO, passed away November 16, 2021 at his home in Joplin. David was born on August 4, 1931, to Orville and Mary Hilma Huffman of Chanute, KS. One of David’s fondest memories was growing up and working with his family in their grocery store in Chanute when he was six years old until about the age of twenty. He spent his youth in Chanute, KS, graduating from Chanute High School in 1949 and Chanute Junior College in 1951. He then began a professional career teaching in the Chanute public schools. He entered the Army in 1952 and spent two years in military service during the Korean War. After his military discharge, he attended Pittsburg State University where he earned his BS, MS, and Ed.S. David spent the next 40 years in education in the Pittsburg, KS public school as a teacher and administrator. He was a part-time instructor at Pittsburg State University. He also served as a consultant for the U.S. Office of Education in Washington, D.C. He received many professional honors during his career, including an appointment to the Kansas Teachers’ Hall of Fame in 1995. He was a long-time member of First United Methodist Church while he lived in Pittsburg. David was also active in civic affairs, serving on the Pittsburg Public Library Board and serving as chairman of the Pittsburg City Recreation Board. He was a charter member of the Pittsburg Sunflower Kiwanis Club. In 1953, David married Ruth Pendleton in El Paso, TX. They were married forty-nine years before Ruth’s death in 2002. They raised four children. David was preceded in death by his wife, Ruth; his parents, Orville and Hilma Huffman; and his brother, Wayne Huffman. David married Joy Boyd Bath in March 2003 in Joplin, MO. They enjoyed traveling and visited many places. They were married eighteen years. David is survived by his wife, Joy; his children, Lydia Zager (Larry) of Hendersonville, TN, Denise Fitzpatrick (Bob) of Pittsburg, Paul Huffman (Cathy) and Brian Huffman (Melanie), all of Wichita, KS; and his step-daughter Brenda Conyers of Joplin. Additional survivors include his sister-in-law, Nancy Huffman of Chanute, five grandsons and two granddaughters, nine great-grandchildren, three step-grandsons, and eight step great-grandchildren. He was also a favorite uncle to many nieces and nephews. Graveside services will be 2pm Friday, November 19, 2021 at the Garden of Memories Cemetery. Family will receive friends at the Bath-Naylor Funeral Home in Pittsburg following the graveside from 3-5pm. Condolences may be left at www.bathnaylor.com. Memorials may be sent to the David and Joy Huffman Education Scholarship at Pittsburg State University, Pittsburg, KS.

David L. Huffman, age 90, of Joplin, MO, passed away November 16, 2021 at his home in Joplin. David was born on August 4, 1931, to Orville and Mary Hilma Huffman of Chanute, KS. One of David&#8217;s fondest memories was growing up and working... View Obituary & Service Information

The family of David L. Huffman created this Life Tributes page to make it easy to share your memories.

Send flowers to the Huffman family.