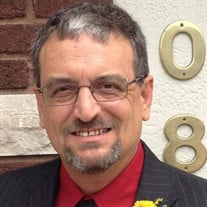 David Allan Hamilton 55, passed away 9:54 pm, Wednesday, November 29, 2017, at his home in Pittsburg, KS, following a long battle with lung cancer. David was born July 14, 1962, in New Orleans, LA, the son of Glenn Allan and Joan Shead Hamilton. His childhood was spent in Leavenworth, KS, and he moved with his family to Pittsburg in 1978. He graduated from Pittsburg High School in 1980. He enlisted in the United States Navy in April 1980 and served the next 13 years in various parts of the world. One of his favorite assignments was the three years he spent in Holy Loch, Scotland, where he was able to have his family with him. He reenlisted in the Naval Reserve in 2005 and served in Bahrain, receiving the War on Terrorism medal. After leaving the Navy, David became a truck driver and drove over two million miles without an accident. He worked for Schneider, Swift and Transport America as a driver and /or dispatcher, retiring for health reasons from Transport America in May of 2017. David is survived by his three children: Andrew of Joplin, MO; Kevin (Ashley) of Columbia, TN; and Megan (Kyle) Stout of St. Charles, IL; grandchildren Thomas Hamilton and Nora Stout, with another expected in March; his mother Joan Hamilton of Pittsburg, KS; sister Lisa Hamilton Harris (Keith) of Hepler, KS; niece Molli Harris; several aunts, uncles and cousins; and the mother of his children, Sherry Zachman, Pulaski, TN. David was preceded in death by his father and grandmother, Mary Ann Shead. Funeral Services will be 10:00 am, Monday. December 4, 2017, at the Trinity Baptist Church, 301 E. Washington, Pittsburg, KS, with Pastor Jordan Hodges officiating. Burial will follow at the Ft. Scott National Cemetery in Ft. Scott, KS. Full Military Honors will be provided by the United States Navy. The family will receive friends from 6-7:00 pm, Sunday, December 3, 2017, at the Bath-Naylor Funeral Home in Pittsburg, KS. Friends may call after 12:00pm Sunday. Condolences may be left at www.bathnaylor.com. Arrangements and services are under the direction of Bath-Naylor Funeral Home of Pittsburg, KS.

The family of David Allan Hamilton created this Life Tributes page to make it easy to share your memories.

Send flowers to the Hamilton family.