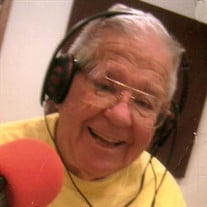 David Carles Bevan was born in Argonia, Kansas on June 8, 1916, the first of 5 boys born to Herbert Everett and Percis Hollowell Bevan. The family moved to Wichita shortly after his birth. He graduated from Wichita North High School in 1933. After high school he worked for the Southern Kansas Stage Lines (later the Santa Fe Trailways bus company), first as an office boy and later as a ticket agent at various locations in Kansas, Illinois, Missouri and Arkansas. He enlisted in the U.S. Army in January of 1942 (C Company, 1st Battalion, 180th Infantry, 45th Division of the 7th Army). He served first in North Africa, participated in the invasions of Italy and France, and at the end of the war was commissioned a 2nd Lieutenant and trained for bomb disposal duty. He was discharged in January 1946, returned to the United States and went back to work for Santa Fe Trailways. On March 21, 1948 he married Elnora Jane Ferguson of Wichita, Kansas. David and Jane had three children, Elnora and David (twins) and Leah. David was employed by the Department of the Army to work with the National Guard, stationed in Wichita. In 1955 the family moved to Derby, Kansas, and then to Parsons, Kansas in 1965 when David accepted a position as Chief Administrative Supervisor for a new Army Reserve unit being established there. The family were members of the First Baptist Church in Parsons, where David and Jane were active in the choir. David performed many solo concerts in churches throughout southern Kansas, accompanied by Jane on the piano. David retired as a Chief Warrant Officer in September of 1975, after 33 years of service to the military. In retirement the couple spent several summers working at Silver Dollar City in Branson, Missouri, and in 1988 volunteered for a year at an American Baptist Convention-sponsored children’s home in Kodiak, Alaska, where they organized donations of clothing and household goods and opened a sale house each Saturday afternoon as a fundraiser for the mission. David and Jane later moved to Pittsburg, Kansas, where David volunteered at KRPS radio. He eventually became the host of Swing Shift, a Friday night jazz program on KRPS. David and Jane celebrated their 50th wedding anniversary in March of 1998. After his wife’s death David resided in assisted living at Via Christi Village in Pittsburg. He was a resident there at the time of his death at the age of 101. David is preceded in death by his wife of 50 years, Elnora Jane, his parents, and one brother (Bill). Survivors include daughter Elnora Lynn Nokes (Larry) of Olathe, Kansas and her twin brother Gerry David Bevan of Lawrence, Massachusetts, daughter Leah Carlene Black (Ken) of DeWitt, Michigan, grandsons John D. McCoy (Erin) of Kansas City, Kansas and Ken McCoy of Brown City, Michigan, granddaughter Sarah McCoy Robb (Travis) of Chanute, Kansas, great-grandson Quinn McCoy Robb of Chanute, Kansas, brothers Ralph, Jim, and Herb, and numerous nieces and nephews. Cremation arrangements are by Bath-Naylor Funeral Home of Pittsburg, KS.

David Carles Bevan was born in Argonia, Kansas on June 8, 1916, the first of 5 boys born to Herbert Everett and Percis Hollowell Bevan. The family moved to Wichita shortly after his birth. He graduated from Wichita North High School in 1933.... View Obituary & Service Information

The family of David Carles Bevan created this Life Tributes page to make it easy to share your memories.

Send flowers to the Bevan family.