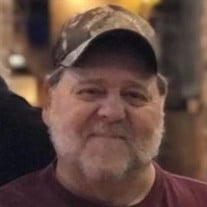 Danny L. Gepford Sr. 69, of Frontenac, KS died 3:07am Sunday July 14, 2019 at the Via Christi Hospital in Pittsburg, KS following an illness. Danny was born February 20, 1950 in Pittsburg, KS the son of Edward A. and Theresa (Costantino) Geprford. He was a lifelong resident of the area and attended Frontenac schools. On March 26, 1970 Danny married Ina (Cindy) Bouray in Girard, KS; she preceded him in death on December 5, 2010. He later married Deitre L. Cornwall. They later divorced. Danny worked for the Frontenac Fire Department for many years as Captain. He also worked as a Police Reserve and owned and operated his own dump truck. He also spent some time working for Pittsburg Steel. Danny was of the Christian Faith; he was a member of the Rolling Nostalgia Car Club; spent many mornings at Frontenacrs for Coffee; loved his family and building monster trucks with his family was some of the best times in his life. Survivors include his fiancée Debra Nims of Pittsburg, KS; children Danny Gepford Jr. and wife Lebie of Frontenac, KS and Angelina Austin and Darrin Austin of Frontenac, KS; siblings Eddie Ray Gepford and wife Debbie of Frontenac, KS, Steve Gepford and fiancée Shirley Jaynes of Pittsburg, KS and Tina Vanderpool of Oronogo, MO; grandchildren Alexander Gepford, Abriona Gepford, Ethan Gepford, Tia Austin and Ashlyn Feruson; and many nieces, nephews, cousins, grandchildren and great-granchildren. Danny was preceded in death by his wife and parents. Funeral Services will be 11:00am Thursday July 18, 2019 at the Friskel Funeral Home in Frontenac, KS with Pastor Murray Balk officiating. Burial will follow at the Beulah Cemetery in Beulah, KS. Family will receive friends from 7-8:00pm Wednesday July 17, 2019 at the Friskel Funeral Home in Frontenac, KS. Friends may call after 2pm Wednesday. In lieu of flowers the family asks expressions of sympathy to be in the form of memorials to Danny Gepford. Friends may drop off or mail memorials to 230 E. McKay Frontenac, KS 66763. Condolences may be left at www.friskelfuneralhome.com.

Danny L. Gepford Sr. 69, of Frontenac, KS died 3:07am Sunday July 14, 2019 at the Via Christi Hospital in Pittsburg, KS following an illness. Danny was born February 20, 1950 in Pittsburg, KS the son of Edward A. and Theresa (Costantino) Geprford.... View Obituary & Service Information

The family of Danny L Gepford created this Life Tributes page to make it easy to share your memories.

Send flowers to the Gepford family.