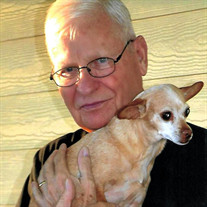 Daniel H. Hix, 83, of Pittsburg, died Thursday, April 23rd at his home following a brief illness. He was born August 26th, 1937 to Myrl and Helen (Tabler) Hix, in Pittsburg. Following retirement, Dan and his wife of 57 years, Joan, lived in Lawrence, KS and Las Vegas, NV, eventually returning to Pittsburg prior to his passing. Dan is survived by the love of his life, Joan, and his favorite canine companion, Carly Sue, both of the home; daughters Dana Hummell of Overland Park and Jean (Robert) Viloria of Lawrence; son Bryan of Lenexa; five grandchildren and one great-grandchild; brother, Clifford and sister-in-law, Judy of Pittsburg; and many nieces, nephews and friends. He was preceded in death by twin sons, John and David Hix, his sister, Helen (Bob) Stroud and several beloved members of his extended family. Prior to his own departure, Dan mourned the passing of many cherished friends. Among those he frequently remembered were Carl Endicott, Henry McGeorge, Merritt Vandris and Mary Kay Fanoele. A memorial service planned for late May / early June will be announced. The family invites those who knew and loved Dan to email memories or photos to [email protected] His family and friends love Dan and will miss him until we see him again.

The family of Daniel Henry Hix created this Life Tributes page to make it easy to share your memories.

Send flowers to the Hix family.