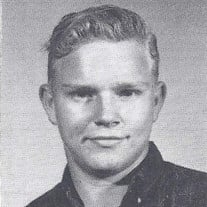 Dale W. Spieth, 70, of Columbus, KS died at 2:47 am, Monday, January 7, 2019 at Freeman West, Joplin, Missouri. He was born November 29, 1948, in Baxter Springs, Kansas, the son of Kenneth and Gertrude (Hembree) Spieth. He was a lifetime resident of Columbus, Kansas, and was a high school graduate of Columbus High School. On September 1, 1972, Dale married the love of his life, Pat Spieth, she preceded him in death April 27, 2017. After high school, he attended Pittsburg State University where he earned his Bachelor’s degree with a major in Political Science and Philosophy. Dale worked as social worker for the state of Kansas form over 30 years. He loved being involved in the community. He played a role in starting the Columbus Girls’ Softball League. Dale loved playing slow pitch softball back in his younger days. Dale is survived by his daughter; Deena Kelley (Chad) of Paxico, Kansas, son; Eric Spieth of Columbus, Kansas, 2 brothers; Jim Spieth (Nancy) Fort Myers, Florida, Grant Spieth (Toni) of Columbus, Kansas, 3 grandchildren; Bryce and Reagan Kelley, Ashton Spieth, 1 niece; Tiffany Carbajo, 3 nephews, Travis, Gabe, and Seneca Spieth and many cousins. He was preceded in death by his wife, parents and sister; Fawna Box. Funeral Services will be 2pm Friday, January 11, 2019 at the Bath-Naylor Funeral Home in Columbus with Reverand Christine Iannucilli officiating. The family will receive friends at the funeral home on Thursday evening from 6-7pm. Inurnment will be in the Lone Elm Cemetery at a later date. Condolences may be left at www.bathnaylor.com. Memorials may be made to the Columbus Community Foundation; these may be left or mailed to the funeral home. Services by Bath-Naylor Funeral Home in Columbus, KS.

Dale W. Spieth, 70, of Columbus, KS died at 2:47 am, Monday, January 7, 2019 at Freeman West, Joplin, Missouri. He was born November 29, 1948, in Baxter Springs, Kansas, the son of Kenneth and Gertrude (Hembree) Spieth. He was a lifetime resident... View Obituary & Service Information

The family of Dale W. Spieth created this Life Tributes page to make it easy to share your memories.

Send flowers to the Spieth family.